My decisions are simple when I go grocery shopping. I try to eat and buy organic as much as possible for health, beauty, prevention of disease and the environment. When I saw this new remarkable video, I wanted scream to from the roof tops. Not because of joy though, but because I know so many people are unknowingly being exposed to chemicals that could harm them. This video I am going to share with you today is DRAMATIC. When you see what happens when an average family that eats conventional (non-organic) food makes the switch to organic, your grocery store decisions could change forever. In just 2 short weeks, this family experienced a remarkable transformation! 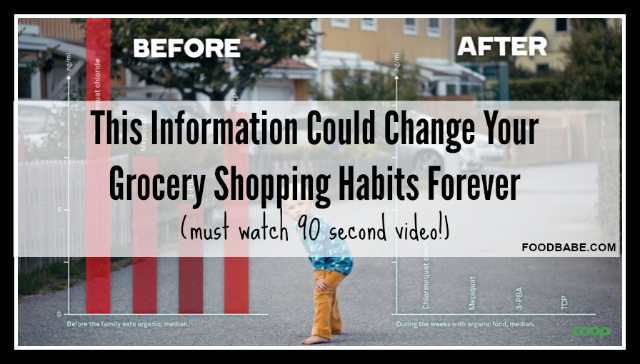 In January, the independent Swedish Environmental Research Institute conducted this small experiment, using a family of five (two adults and three children), to determine whether there would be any significant changes in the pesticide levels in their bodies if they ate a diet of strictly organic food. They took urine samples from all of the family members every day for a week while they ate all conventional non-organic foods, and then every day for two weeks after they switched to all organic, so that they could analyze it for pesticides and their metabolites. Note that the term “pesticides” is an all-inclusive term for a substance that kills pests – including weeds – such as herbicides, insecticides, fungicides and growth inhibitors.

Some pesticide levels that decreased after switching to organic:

Does a single dose always make the poison?

There’s the argument that the levels of pesticides in their bodies were low when they were eating conventional food, and that they weren’t high enough to cause health problems. You know the phrase: “the dose makes the poison”? However, the researchers here said we don’t know that for sure. They expressed concerns that we don’t know enough about the effects of all of these chemicals when they are combined in the body:

“the system for risk assessing chemicals is suitable only for one substance at a time. There is, therefore, no approved method for making an overall assessment of the effect of multiple chemicals simultaneously, i.e. the possibility that chemicals interact with one another to give a stronger or weaker effect than they would have individually. This is commonly called the “combination effect” or popularly known as the “cocktail effect”….

Given how little we currently know about the combination effects of all the different chemical substances that people are exposed to in their day-to-day lives, it may be wise to apply a principle of caution in this regard.”

What did the researchers say about the results?

This isn’t the only data that came to similar conclusions!

A much larger 2015 study published in Environmental Health Perspectives analyzed the dietary exposure of organophosphates (OPs), the most common insecticides used on produce in the U.S. They found that “those who reported eating organic produce had significantly lower OP pesticide exposures than those consuming conventionally grown produce”. The researchers concluded:

“One way people can reduce their pesticide exposure… is to eat organic versions of those foods that are listed on the Environmental Working Group’s “Dirty Dozen” list, which ranks fruits and vegetables according to pesticide residue level”.

Likewise, Consumer Reports recently came out with a scientific report on pesticides, and recommends choosing organic food to decrease exposure to pesticides. Consumer Reports says, “organic is always the best choice because it is better for your health, the environment, and the people who grow our food”.

After learning all this, are you still worried about the expense of organic foods?

“You can either pay the farmer or the hospital”, says my friend Birke Baehr. I am here to help – please see over 75 of my best organic budget tips here.

So, what do you think? Is it worth it to choose organic food?

Tell me in the comments below.

Do you have family or friends that need this information or would like to know why you choose organic foods? Please share this video and information with them!

P.S. If you are looking for additional assistance or guidance in living an organic lifestyle check out my New York Times Best Selling book The Food Babe Way and also consider joining the Food Babe membership program. I am here for ya! 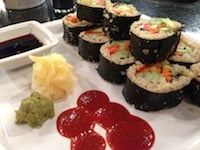 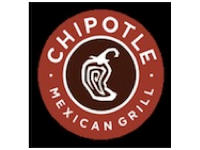 What’s in Chipotle’s Food? They Still Won’t Tell Us!

174 responses to “This Information Could Change Your Grocery Shopping Habits Forever (Must Watch 90 second Video!)”