When I told a friend recently that my next post was going to be on avoiding genetically modified organisms (GMOs) at restaurants, he responded “good f*&*ing luck!”…It’s nearly impossible to avoid GMOs if you are eating out and the reaction from my friend illustrates exactly how dire the situation has become here in America.

Considering I only found two restaurants in my hometown of Charlotte, NC that are 100% GMO free, I thought it would be prudent to share the best tips to minimize your exposure to GMOs when eating out, especially until the government listens to the overwhelming majority of us and puts labels on GMOs.

How to avoid consuming GMO’s when eating out:

Since it’s a serious feat to avoid genetically modified foods, I investigated all of my favorite restaurants here in Charlotte and of course I found GMOs being used at almost every single one. There were only two eateries that were 100% clean of GMO’s – Luna’s Living Kitchen, and Viva Raw.

As I was echoed in the NY Times this week – Luna’s Living Kitchen is one of my favorite restaurants – it’s the most truly organic place in Charlotte and if you are visiting in town this week for the Democratic National Convention (DNC), having breakfast there is a must.  My favorite option is the organic coconut milk iced coffee (the ice cubes are handily made from coffee, so your caffeine buzz doesn’t get watered down) and the raw bagel with cashew cream cheese pictured below.  They also have a coconut yogurt parfait that is to die for if you are looking for something sweet to start your day. 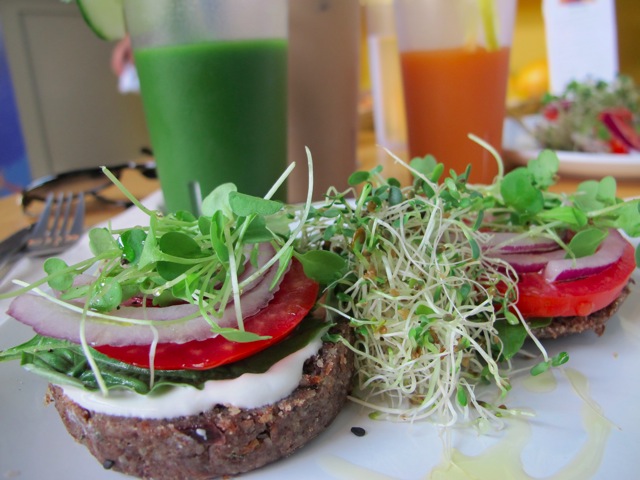 Viva Raw which is located in 7th Street Public Market is not an actual restaurant, however they do have an awesome bar you can sit at and sip their fresh local and organic pressed juice. They also sell some pretty incredible raw snacks that are free of genetically modified ingredients. You can definitely get your fill of nutrients here and it’s a place I’ve been frequenting a lot lately. For me the “Pure Green” juice and their Goji Berry Granola make a really terrific meal on the go. This week they are running a special menu item in honor of the DNC that I am dying to try – it’s called the “Barackly” named after President Obama. It’s got broccoli, cucumber, apple, green pepper, celery, onion, lemon, rosemary, garlic, and jalapeño. What a combo of ingredients, right?! 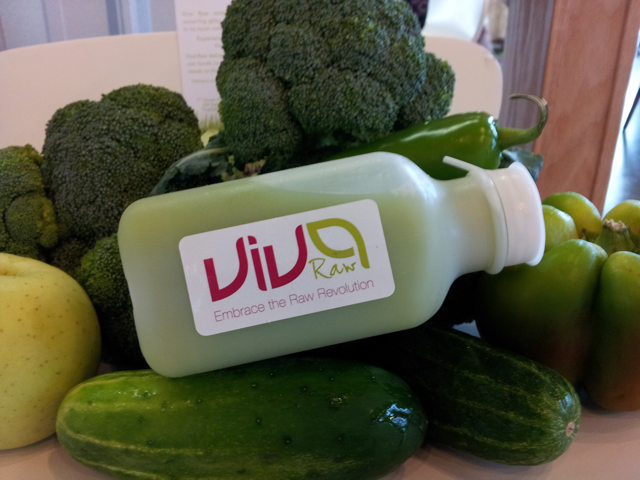 There are two places, also in 7th Street Public Market that deserve an honorable mention, as they are ALMOST GMO free.

The local and mostly organic Pure Pizza is INCREDIBLE. I usually make my own pizza on their sprouted grain crust (they have a gluten free one too), leave off the cheese, add all their fresh farm veggies, then add lots of their green palermo sauce and arugula on top. After I wrote about them using a soy based oil on the bottom of their dough – they changed it to pure olive oil! It was the only ingredient on their vegetarian menu that wasn’t GMO free. Now I can go there on #GMOfreeFriday in pure bliss!

Not Just Coffee is hands down the cleanest place to get a cup of organic coffee in Charlotte. They use homeland creamery for their milk which I wasn’t able to verify if the soy/corn feed they mix with the hay & grass to feed the cows was GM or not. They also have almond milk available which I LOVE. Their coffee presentation is so beautiful – you don’t want to drink it right away – but stare in awe instead!

In the meantime, I’ve got a busy week ahead here in Charlotte.  As I mentioned, the DNC is in town and I’m not just partying. I am an elected delegate to the convention representing the 12th Congressional District of North Carolina. I plan on spending every waking moment talking to the political leaders who influence food policy here in America – especially Secretary Tom Vilsack, the head of the USDA. I’ll be tweeting real time updates all week and reporting back here when the week is over.

I thought it would be fun to share the menu and pics from the biggest party in town last night below. The DNC welcomed the media (and special guests like me) with a ridiculous amount of choices from several restaurants in Charlotte…which I didn’t even have time to taste, because I was incredibly pre-occupied with one goal in mind: Labeling GMOs.

9/20 Update: To find out what happened at the DNC (protesting in front of Secretary of Agriculture Tom Vilsack) – check this post for a play by play. 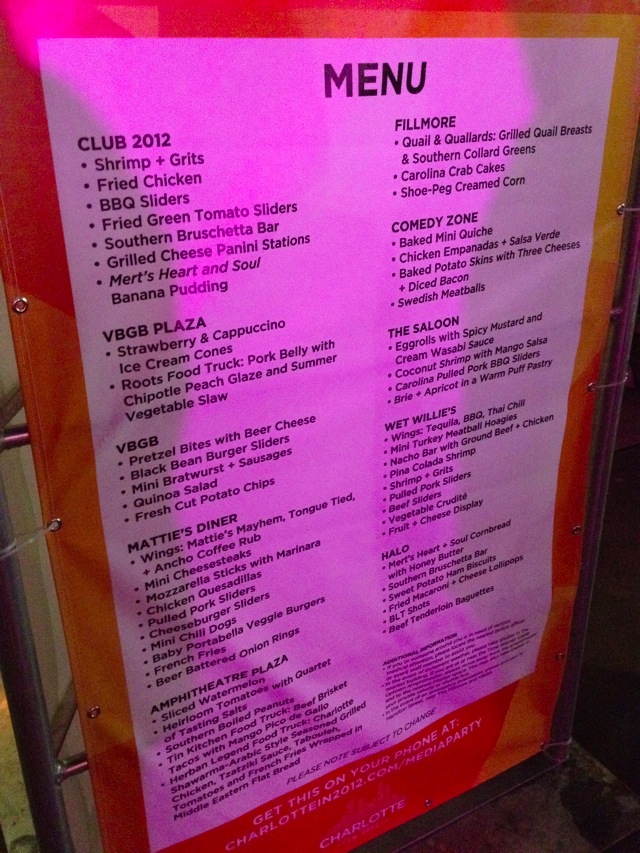 Earlier this week, I asked CNN on Twitter if they were serving GM corn at the mexican restaurant turned “CNN Grill”…they sadly didn’t respond. 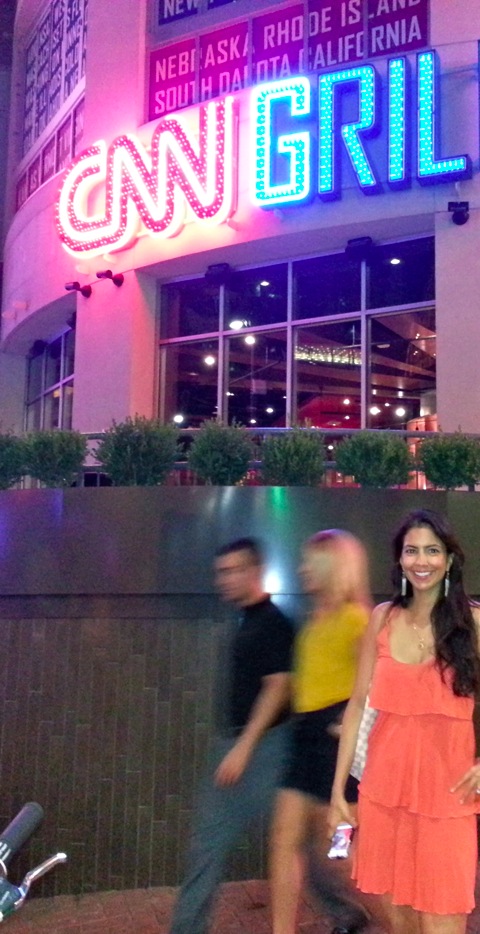 I caught up with the Mayor of Charlotte – Anthony Foxx. I’ve known him since 2006, and served with him as a delegate in 2008 in Denver. What he has brought to Charlotte in just 3 years of being Mayor has been incredible. 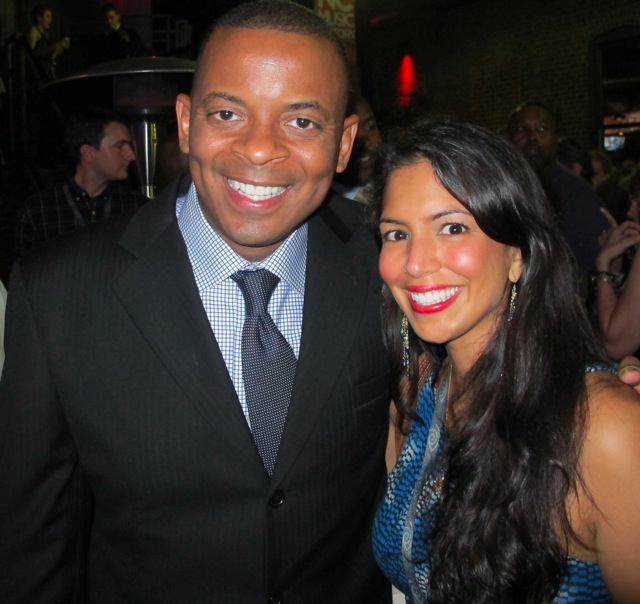 My Favorite Recipes For The Super Bowl + Exciting News! 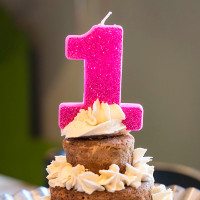 Healthier Birthday Cake For My One Year Old 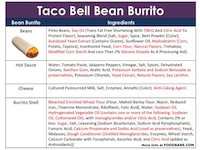 What Taco Bell Isn’t Telling Us About Their Ingredients, But You Need To Know!