If You Eat, You Need Us

As a member of the Food Babe Army, you will be on the front lines of this movement that is sweeping the food industry by a storm and creating a better food system for us all. Be a part of this change! You’ll also be the first to know about major FoodBabe.com campaigns and investigations, along with future petitions and news about the great strides we are taking.

Who Is The Food Babe Army?

The Food Babe Army is the powerful group of people who are committed to demanding and actively creating change in the food industry. We are the millions of people who sign petitions, call major company headquarters, share reports and investigations with our friends and use our voices to make sure we are heard. Most importantly, we vote with our dollars, supporting the companies that are creating a healthier food system for all.

What Is Our Mission?

Our mission is to create a healthier world full of the most nutritious, safe, and wholesome food to feed ourselves and our families. We create public awareness about what is in food, how to make the right purchasing decisions at the grocery store and how to live an organic lifestyle in this over-processed world. We inspire change in the food industry, beginning within our local communities and expanding into the largest worldwide food corporations. In demanding that food manufacturers and retailers provide organic and nutritious food, we open the door for a greater supply of good affordable food in the world around us. Collectively, we have the power to change the world.

Why Should I Join The Food Babe Army?

The Food Babe Army has created real change through petitions and putting pressure on major food corporations! Here are some recent examples of how the Army helped make a difference:

In February 2014, FoodBabe.com launched a petition against the world’s largest sandwich chain, Subway, to remove azodicarbonamide from their sandwich bread. Due to the strength of the Food Babe Army, the petition gathered more than 50,000 signatures in just 24 hours. Subway quickly responded by announcing plans to remove the chemical from all of their sandwich breads, and accomplished this in April 2014. Pizza Hut, Bimbo Bakeries, Martin’s Potato Bread, Nature’s Own, Olive Garden, Starbucks, and Publix Grocery Store have announced they also have plans to remove the chemical from their products.

In October 2015, Subway committed to eliminating the use of antibiotics in all of their meat in the U.S. – This announcement came following our major petition in conjunction with other petitions launched by other consumer advocacy groups (U.S. PIRG, NRDC, Center for Food Safety, Friends of the Earth and others). All of these petitions received a total of over 250,000 signatures! I was literally about to board a plane to deliver petitions to their headquarters when this announcement was made.

After petitioning Kraft with over 350,000 signatures and leading a strong 7 month campaign to educate the public about the dangers of artificial food dyes, Kraft announced that it’s starting to remove these harmful petroleum-based food dyes from some Mac & Cheese products marketed to children.

In November 2012, GMO Inside starting calling on consumers to put pressure on General Mills to make Cheerios without GMOs due to concerns over the health and environmental impacts of GMOs. As soon as the campaign launched, tens of thousands of consumers, including members of the Food Babe Army, started flooding Cheerios’ Facebook page with concerned comments regarding GMOs in Cheerios. Over 25,000 people took part in the email actions and calls to the company. In January 2014, General Mills announced that they have removed all GMOs from regular Cheerios by changing the use of GMO beet sugar to non-GMO cane sugar.

A FoodBabe.com blog post entitled “Chick-fil-A or Chemical-fil-A” exposed that the chain’s sandwich had nearly 100 ingredients, including peanut oil with TBHQ, a chemical made from butane. The post went viral due to the efforts of the Food Babe Army sharing it on social media. Soon after, officials at Chick-fil-A contacted Vani to consult on several ingredient changes. After over a year of follow ups, Chick-fil-A has started to remove TBHQ, high fructose corn syrup and artificial food dyes from their menu.

Beginning in 2012, FoodBabe.com began an investigation of Chipotle’s food and published a blog post, “Chipotle vs. Moe’s – What’s Really In That Food?” revealing that the company refused to disclose ingredients and that they were using GMO ingredients in their cooking oil, trans fats in their tortillas, and that their black beans contained GMO soybean oil. One week after posting this investigation, Chipotle requested a meeting with Vani to discuss the public disclosure of its ingredients. After meeting with Chipotle, tremendous attention regarding the FoodBabe.com investigation continued and a subsequent petition to Chipotle was initiated. They responded in early 2013 and posted all ingredients online along with GMO disclosures. They have also begun removing GMOs from their food.

In April 2012, FoodBabe.com published a blog post, “Panera Bread – The Healthiest Fast Food?!?” which exposed just how heavily processed their food really is with several unnatural ingredients such as autolyzed yeast extract and hydrolyzed corn, along with suspected GMO ingredients such as canola oil and corn syrup. This post was read and shared by over a million members of the Food Babe Army. In June 2014, Panera responded by announcing that they are set to remove all artificial colors, flavors, sweeteners and preservatives by 2016.

Although most food and beverage manufacturers are legally required to label their ingredients, government regulations do not require that beer manufacturers disclose their ingredients to the public, and the alcohol industry has lobbied for years to keep this information secret. In July 2013, I conducted a controversial investigation into the ingredients in beer and uncovered a long list of additives that are approved such as high fructose corn syrup, artificial flavors, stabilizers, artificial colors, and GMO ingredients. Yet, none of the mainstream beer companies agreed to share their secret ingredient lists. In June 2014, I launched a petition to ask the two most popular beer companies in the U.S., Anheuser-Busch and MillerCoors, to publish the complete ingredient lists for all of their beers online. Within only 24 hours, the petition received over 40,000 signatures and gained exposure on several mainstream media outlets including ABC News, USA Today and the Chicago Tribune. This same day, Anheuser-Busch announced that they would agree to publish their complete ingredients online and invited me to meet their brewmasters in St. Louis. On the heels of this announcement, MillerCoors quickly followed suit and promised to list ingredients online, starting with their most popular brands. Anheuser-Busch has since published the ingredients for several of their beers online, and has vowed to publish them all within coming months.

After my cousin asked me to investigate the ingredient “carrageenan”, I wrote a blog post about this additive in May 2012. The post highlighted work done by The Cornucopia Institute, who reported that food-grade carrageenan may cause gastrointestinal inflammation, intestinal lesions, ulcerations, and malignant tumors. Carrageenan found in many dairy and non-dairy substitute products, including those that are certified organic.  Members of the Food Babe Army began asking food companies to remove carrageenan and avoided purchasing products that contained it. In August 2014, Whitewave Foods confirmed they will remove carrageenan from all their products, which includes some varieties of Silk soy milk, Silk almond milk, and Horizon organic dairy products by 2015 due to this consumer pressure.

Following the attention of my Starbucks investigation in 2012 and a national TV appearance discussing their ingredients in March of 2014, the Starbucks PR team reached out to me to open dialogue. One finding from my investigation revealed that Starbucks uses Class IV caramel coloring that contains the chemical 4-Mel, which is classified as a possible human carcinogen by both The National Toxicology Program, The International Agency for Research on Cancer, The Center of Science in Public Interest and The Consumers Union. At the time, Starbucks told me that their use of caramel coloring is safe and mentioned no plans to remove it.  As the Fall launch of their “Pumpkin Spice Latte” was just around the corner, I obtained and published the complete ingredient list in their most popular seasonal drink in August 2014, revealing that it contained 2 doses of Class IV caramel color. This post went viral with over 10 million views in just a few days and the story was picked up by major news outlets from USA Today to Entrepreneur, leading up to a TV appearance on Fox & Friends. One year later on August 17, 2015, Starbucks published the new ingredients in their reformulated Pumpkin Spice Latte, which now includes real pumpkin and no caramel coloring. Starbucks is in the process of removing caramel coloring from all of their drinks, and has officially started listing ingredients online for all customers to see.

In January 2015, I launched a petition asking Kellogg’s and General Mills to remove the preservative BHT from their cereals in the United States. Due to stronger regulations in Europe, General Mills and Kellogg’s both don’t use BHT in their cereals overseas, but sell the same cereals with BHT in the United States. BHT is a synthetic preservative that is thought to be an endocrine disruptor and linked to cancer in some animal studies. The petition received over 30,000 signatures in just 24 hours, and within hours General Mills told the press that they are working on removing BHT from their cereals in the U.S. and Kellogg’s told reporters that they are “actively testing natural alternatives” to BHT. General Mills has made progress and has since removed BHT from some varieties of their cereal – Golden Grahams, Cocoa Puffs, Banana Nut Cheerios, and Corn Chex no longer contain BHT.

My team and I spent months contacting In-N-Out’s Customer Service and spoke directly with some restaurant locations trying to nail down all of their ingredients. In December of 2015, I sent a letter to the owner and President of In-N-Out, Ms. Lynsi Snyder, asking her to discuss my concerns. She declined without further comment. I moved forward by replying to her assistant and asking directly for a list of ingredients and also for their policy on the use of antibiotics in the production of their meat. A few weeks later on January 15, 2016, I received an email from Keith Brazeau, Vice President of Quality, saying they will publish ingredients but did not give a timeline. In February of 2016, I launched a new investigation into the In-N-Out restaurant chain calling on them to stop the routine use of antibiotics. Within 2 days, In-N-Out announced they will be changing their antibiotics policy. They have not announced a timeline or many details. Together with U.S. Pirg, Friends of The Earth, The Center For Food Safety and others, we are making sure they follow through and publish a detailed antibiotics policy.

We have big plans for our Army, and you don’t want to miss out on what’s ahead. What are you waiting for? Join the Food Babe Army now! Just enter your email address below to get started: 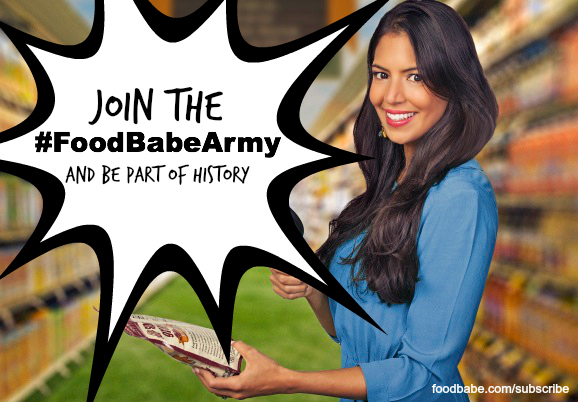