The countless commercials touting Subway’s new “Fritos Chicken Enchilada Melt” have gotten so ridiculous, I am about to lose my mind. A member of the Food Babe Army sent me leaked photos of the ingredient list of this highly processed sandwich. The full ingredient list is below – you don’t want to miss this.

I’ve been asked why I targeted Subway in my petition to remove azodicarbonamide from bread many times now. While I already knew this chemical is being used in restaurants and bakeries all across the country, I was fed up with the way Subway misleads its customers with their deceptive “Eat Fresh” advertising. Something needed to be done, especially since they completely ignored my investigation into their ingredients in 2012, further pressure in 2013, and repeated phone calls and requests to their corporate headquarters.

As taken from Subway’s website, “We’ve become the leading choice for people seeking quick, nutritious meals that the whole family can enjoy” – they truly want you to believe they serve health food and many people fall victim to this, thinking eating at Subway is better than eating at other fast food restaurants. Subway uses many marketing tactics to drive this point home and dupe the public – but the tactics that really bother me are their partnerships with olympic athletes, medical associations and our government leaders, because many people take their endorsements as credible and rely on them. Here’s what’s really happening:

The American Heart Association’s endorsement of Subway as “heart healthy” is a farce!

Subway was the first restaurant to get the American Heart Association’s Heart-Check Certification on some menu items – so Subway prominently displays this little Heart Association logo all over their marketing materials and commercials.  This is so deceptive because the Heart Association’s stamp of approval ONLY applies to a handful of Subway sandwiches without any cheese or sauces.  Who doesn’t get mayo, cheese or oil on their subway sandwich? Most Subway customers are not eating sandwiches without any cheese or sauces and many are not aware that the certification does not apply when they add those items. Furthermore, the Heart-Check seal only applies to salads served with fat-free sweet onion dressing – a dressing loaded with sugar and dimethylpolysiloxane.  Apparently the American Heart Association thinks it is healthy to eat silly putty and breast implants.  Dimethylpolysiloxane is allowed by the FDA to be preserved by several different chemicals that don’t have to be listed on the label – including toxic formaldehyde – oh is that how they keep it “fresh?”

This certification doesn’t come cheap either. An undisclosed annual administrative fee is required by the Heart Association, and Subway has contributed more than 1 million dollars to them in the last few years.  Subway may soon find themselves in the same boat as Campbell’s who was sued last year for their deceptive use of the Heart Association’s certification label in exchange for money.  Especially when you consider that Subway has been permitted to use this label on sandwiches that are packed with 800 mg. of sodium – well above what the Heart Association sodium intake recommendation allows per meal – and much more than what is used in Campbell’s soup.

Who is Doctor’s Associates, Inc.?

To continue portraying the image that Subway is endorsed by a team of health-conscious doctors, you may notice that “Doctors Associates, Inc.” appears on their menu, napkins and packaging.  This is simply the name of the corporation that owns Subway Restaurants and is in no way associated with any medical organization.  Instead of naming their corporation like other restaurants do (i.e. McDonalds Corporation, Arby’s Restaurant Group, Inc.), they chose a name that implies they are a medical organization.  How do they explain the reasoning behind this?  According to their student guide:

“The name was chosen by Dr. Peter Buck and Fred DeLuca in 1966. Dr. Buck was a nuclear physicist by profession, and Fred had aspirations of attending medical school to become a doctor. So, the name Doctor’s Associates Inc. seemed to fit their situation”

First Lady Michelle Obama’s endorsement of Subway as a “healthy choice” for kids is saddening.

Our First Lady is now on the record stating that “Subway’s kids’ menu makes life easier for parents, because they know that no matter what their kids order, it’s going to be a healthy choice” and “Every single item meets the highest nutrition standards.” This came after a huge announcement that Subway is launching a $41 million dollar “Pile on the Veggies” advertising campaign targeted at kids using The Muppets, in cooperation with Michelle Obama’s Let’s Move initiative.  As part of their partnership, Subway is supposed to focus all their kid-focused marketing on the healthier options available in its restaurants.

That’s interesting – since Subway began this marketing campaign in February, the advertising for Subway’s new Frito Chicken Enchilada Melt has far surpassed the few Kermit and Ms. Piggy Ads played. Do Fritos count as veggies now?  What do you think kids are going to ask their parents to eat next time they go to Subway after seeing a commercial like this or this or this?

It may look like Subway is deviating from their healthy image with their new Frito Chicken Enchilada Melt, but it turns out that Fritos has been trying to get accepted by the public as a health food for many years now.  Frito-Lay’s partnership with Subway is just one in a long list of endeavors to make customers think their chips are healthy.

This is ridiculous, right?

Back in 2007, Frito Lay notified the FDA that they were going to label their chips with “heart healthy” marketing claims and the FDA approved it.  More recently, Candice Choi of the Associated Press exposed a newsletter from Frito-Lay to dieticians advocating Fritos as a good option for a gluten-free diet, which provided suggestions that their chips replace traditional breadcrumbs in recipes. 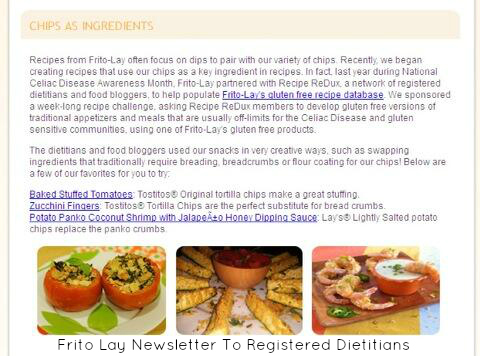 This was preceded by her reporting on Frito-Lay’s sponsorship of Registered Dietician training conferences in which they advise and teach dietitians on health trends and nutrition education. Registered dieticians are the people that are supposed to be telling us what is healthy to eat – and they are being told that Fritos are a health food! Frito-Lay even created an entire website dedicated to nutritionists called “SnackSense.com,” where they further attempt to convince health professionals that chips are healthy.  Here, they tell dietitians that “There is no ‘junk’ in Fritos Original corn chips” and that they fit into a “healthier lifestyle”. 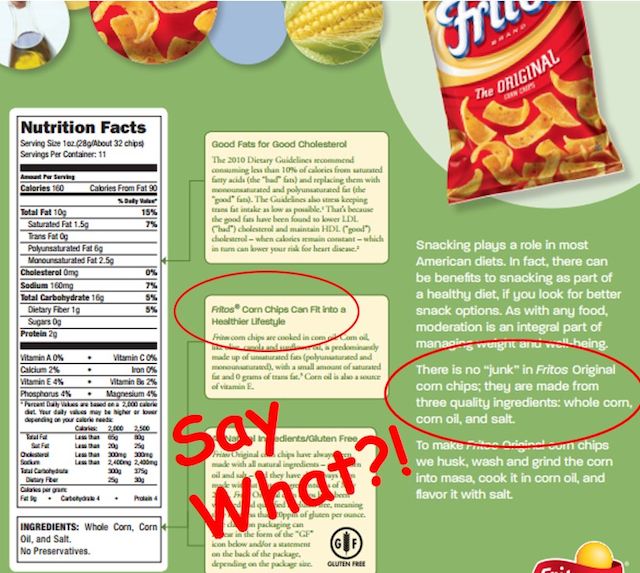 This is just another example of the food industry leading the conversation in this country about food and nutrition – and it’s really got to stop. Fortunately, last year, a group of dietitians formed Dietitians For Professional Integrity, which advocates for an end to the ties between Big Food and registered dietitians. This new group is working to share the truth that Fritos are made from GMO corn and are deep fried in corn oil (likely extracted using a very carcinogenic gas called “hexane”), which is very inflammatory.

So, what’s Subway got to say about their new sandwich with Fritos?

A member of the Food Babe Army shared the secret highly processed ingredients in the new Frito Chicken Enchilada Melt with me recently. This ingredient list is not available on the master list of ingredients Subway posts online – everyone needs to know what’s hiding in this new sandwich! 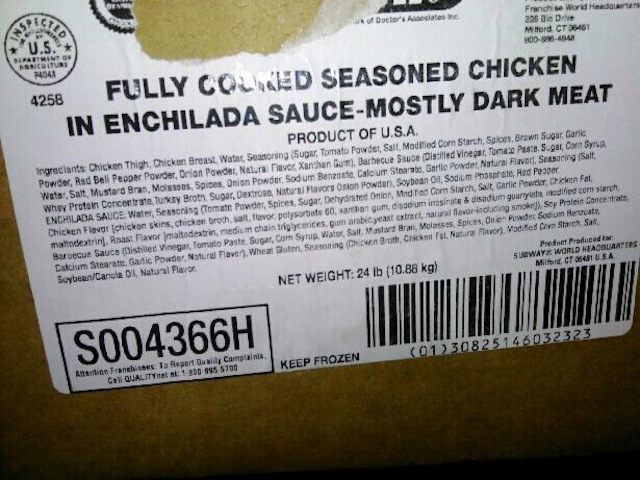 Here’s how Subway describes this sandwich:

“There’s never been another sub like it!  Crunch into a pile of Fritos placed right on top of tender pulled chicken and authentic enchilada sauce for a new satisfyingly delicious bite of flavor you can’t find anywhere else!”

GIVE ME A BREAK – This is what they left out:

Although I’ll never sink my teeth into one of these – food bloggers are calling it a stale “Double Decker Taco” and a soggy “Taco Bell Gordita”.

Yes, GMOs are piled high on this sandwich. The standard is to put 2 ounces of Fritos on a foot long, but there have been reports that up to two full bags of Fritos are dumped, which looks like “the bottom of a garbage can”. TWO BAGS!!!?! The ONLY ingredients in Fritos are GMOs (corn, corn oil) and salt.  Frito-Lay’s parent company (PepsiCo) spent more money than any other corporation (over 4 million dollars) to fight GMO labeling initiatives in California and Washington. They have a lot of GMOs in their food and don’t want to label it – even though 90% of customers have indicated that they want GMO’s to be labeled. It doesn’t fit in with the “Fritos are healthy and natural” mantra that they want you to believe. And remember GMOs are not natural – they are made in a laboratory, increasing the use of toxic herbicides that are causing cancer and have unknown long term health impacts.

This factory farm, antibiotic raised chicken is trucked in frozen and pre-shredded. It’s also laced with the preservative sodium benzoate, which becomes a carcinogen when combined with ascorbic acid (vitamin C).  Ascorbic acid is an ingredient in Subway’s Flatbread and added to many soft drinks – so there is a strong possibility that this cancer-causing combo will end up in your mouth.

Last time I checked, authentic enchilada sauce was made with a few simple ingredients – tomatoes, chiles, oil, spices.  However, Subway’s enchilada sauce is comprised of an astonishing 45 ingredients – including hidden MSG in the form of  yeast extract along with MSG enhancers (disodium inosinate and disodium guanylate). I’ve never heard of an authentic enchilada sauce needing “Polysorbate 60.” According to the “Journal of National Cancer Institute,” the “Journal of Nutrition” and the FAO Nutrition Meetings Report Series, polysorbate 60 can cause detrimental reproductive effects, organ toxicity and cancer in high doses.

What else goes into the Fritos Chicken Enchilada Melt?

Check out the FULL LIST of over 170 ingredients here:

Thankfully, one thing this sandwich doesn’t have is the yoga mat chemical “azodicarbonamide.” A month has passed, since Subway announced that they will remove azodicarbonamide from their bread – but 93,000 people who signed this petition demanding this change have still not gotten a timeline or direct response from Subway headquarters. I called again today and asked customer service for an update. The answer is still that it will be changed in “coming weeks.”  I’d love to know what they are going to replace azodicarbonamide with and if we are finally going to be able to “eat fresh.” Unfortunately, looking at all the other ingredients Subway uses in other menu items, I don’t think we have any hopes of eating fresh anytime soon. They clearly have a lot more work to do!

Please note, until they make this change, If you are still eating at Subway and ordering any other subway roll other than the flat bread – you are still eating yoga mat that is a possible carcinogen, linked to asthma, allergies and skin issues and banned all over the globe.

Join our cause to keep the pressure on Subway to make this change as fast as possible HERE and spread the word about their deceptive marketing practices (and this crazy ingredient list) with your friends and family by sharing this post – everyone needs to know what’s in their food!

Are There Harmful Ingredients Lurking In Your Spice Cabinet? 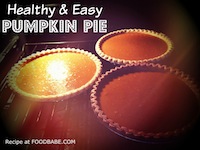 335 responses to “Are You Being Tricked By These Food Industry Marketing Tactics?”