Recently an activist friend reached out to me in desperation looking for advice, counsel and support. My friend is being attacked, threatened, cyber-bullied and harassed because of her recent critical work in exposing Monsanto’s glyphosate in popular food products that children eat. Unfortunately, I know all too well what’s happening to her because it’s happening to me too. This is why I think it’s absolutely critical for us to stick together and not be afraid to tell the truth. These bullies want to intimidate us into submission. They want us to be too scared to write, investigate and share our findings. So scared, that we quit. 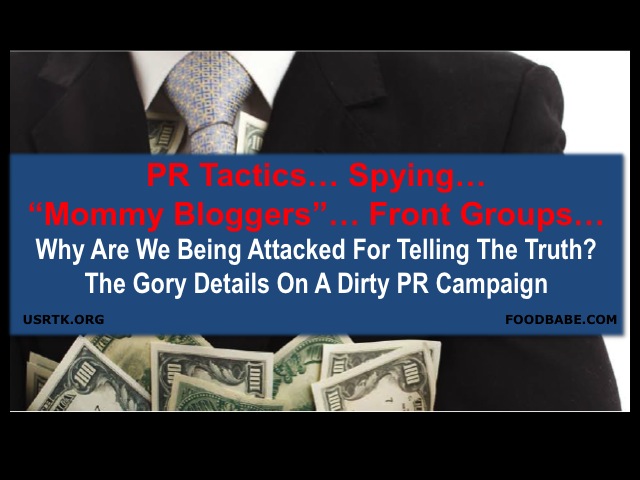 Well, we cannot let that happen. I need you to read this shocking new report and tell everyone you know. The non-profit group U.S. Right To Know‘s report “Seedy Business: What Big Food is Hiding with Its Slick PR Campaign on GMOs” couldn’t have come out at a better time! This is an expose (with lots of details, evidence and facts) on the shady public relations tactics that the biotech industry has been employing. After reading their report, everything is starting to make sense to me now. I have personally experienced these tactics and finally can pinpoint what’s happening to me and other activists.

The big players in the industry – Monsanto, Dow, Syngenta, DuPont, Bayer – are engaging in an extensive public relations, advertising, lobbying and political campaign to make sure that genetically engineered crops (GMOs), and the pesticides they require, continue to proliferate in the U.S.

To improve their public image, they are attempting to manipulate everything we see and hear about GMO crops in the media and on TV, the internet and print articles – using propaganda-laden commercials, “mommy-blogger” articles, farmer endorsements, and front group websites. The biotech industry is feeling threatened, and their profits hang in the balance. This is their last stand. 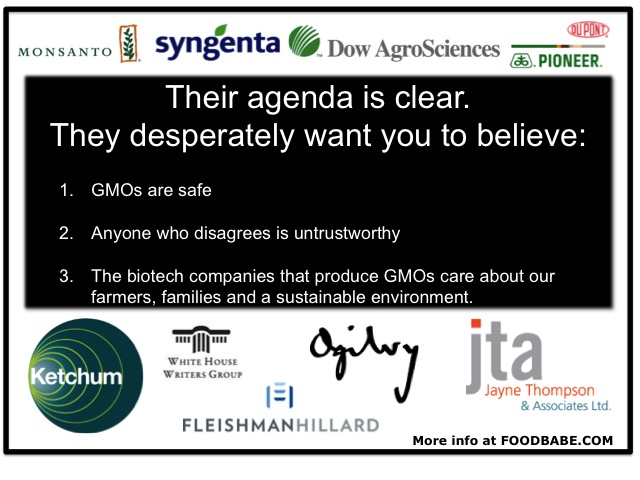 Their agenda is clear. They desperately want you to believe:

I’m not going to go into great detail about all the juicy details that are aptly described in the U.S. Right To Know’s report, because I want you to read the entire report yourself. But – here are some of the most important highlights:

The Biotech Industry is using the same PR firms used by Big Tobacco.

The tobacco industry wants us to forget their deceptive advertising from the 1950s that depicted smoking as “Best for You” as approved by “50 years of scientific tobacco research”. The truth is the tobacco companies only cared about their own profits and not about the health of their customers. They hired big public relations (PR) firms to spin their message and to help them manage the flow of information and truth that was coming out about cigarettes and disease. This is similar to what’s happening in the biotech industry today. Several of the PR firms hired by biotech companies were “once employed by the tobacco industry in its efforts to evade responsibility and liability for the millions of Americans they killed. These PR efforts on behalf of the tobacco industry – perhaps the most significant and destructive PR campaign ever – raise questions about whether these same firms are spinning a similarly deceitful PR campaign for the agrichemical industry to hide any health or environmental risks of genetically engineered food”.

Ogilvy & Mather – DuPont Pioneer hired this PR firm that had an agreement with The Tobacco Institute to provide strategy development, writing assignments, media tours, and contact with target coalition groups.

Ketchum – The Council for Biotechnology (a biotech industry group openly funded by BASF, Bayer, Dow, DuPont, Monsanto, Syngenta) recently hired the PR firm Ketchum to run their website, GMO Answers “to help promote the industry’s views on genetically engineered food”.  Ketchum worked on cigarette advertising campaigns in the 1970s, trying to convince Americans that Fact brand cigarettes were safer than regular cigarettes. Now their focus is on GMOs. This firm is actively communicating with some of my detractors, who brag about getting included in news media about me.

Jayne Thompson & Associates and White House Writers Group – Both of these PR firms hired by Syngenta, previously worked for cigarette-maker Philip Morris to help them with a public relations crisis a little over a decade ago.

Attack anyone that disagrees…

Scientists that speak out against GMOs do so courageously, knowing they will likely be attacked by the biotech industry’s PR minions. If a scientist publishes findings that go against what the industry wants the public to believe, they are harassed, their findings are suppressed, and some careers have been destroyed. Syngenta has been known to have “trained critics” that have undergone media training follow scientists to speaking engagements that have dared to speak out against their products, in an attempt to discredit them. Some notable victims of the biotech industry’s wrath are Dr. Tyrone Hayes, Dr. Ignacio Chapela, Dr. Arpad Pusztai, Dr. Gilles-Eric Séralini, Manuela Malatesta, and Emma Rosi-Marshall.

As part of their “multi-million dollar” campaign for the biotech industry, Ketchum closely monitors Twitter conversations and “seeks out negative (biotech-related) tweets on Twitter”, and attempts to counter their arguments. They are being paid by the biotech industry to discredit any negative information about GMOs, just like Monsanto’s new Director of Millennial Engagement, Vance Crowe, who recently claimed on Twitter that he’s “paid to help untie the knot of fear and misinformation woven together by people making money selling snake oil”.

Ketchum is described as “notoriously secretive” and has a history of targeting consumer and food activist groups like the Center for Food Safety, Friends of the Earth, and GE Food Alert, through their work with the private investigation firm Beckett Brown International (BBI), which apparently hired officers to spy on the activist’s computers, phone records, and trash during Taco Bell’s GMO scandal in 2000. Likewise, Monsanto’s PR firm Fleishman Hillard has targeted public health advocates in the past, conducting espionage and secretly taping tobacco control meetings and conferences. Monsanto has also been caught using “mommy bloggers” to promote the idea that they are a sustainable company that cares about farmers, and about you. Meanwhile, they are largely responsible for the millions of pounds of harmful pesticides that are dumped on crops, polluting our land, water and food.

Don’t believe for one minute that GMOs were created with your best interests in mind. Companies are spending over 100 million dollars to prevent us from knowing the truth!

If you are not following U.S. Right To Know (USRTK) on Twitter, please do here – they are doing some great things and really need our support! They just filed a Freedom of Information Request for correspondence from science professors employed in public universities who write for the GMO Answers which is a website funded by the biotech companies. U.S. Right To Know wants to better understand how these professors (including one that has attacked me personally) are working with biotech companies and PR firms, such as Monsanto, Syngenta, DuPont, Dow, Ketchum, Fleishman Hillard, Ogilvy & Mather.

I never thought in a million years I would be subjected to this disgusting PR game. The only way I and other activists can continue our work is for you to share the truth and spread the word!!! Please share this report with everyone you know.

Thank you so much for standing with me and with everyone who is working for a better food system.

P.S. Your reviews of my new book The Food Babe Way have blown me away! I know many of you are just getting it this week. After you’ve had a chance to read it, please take a moment to leave an honest review on Amazon & Barnes & Noble. Please vote for the review you find most helpful too. 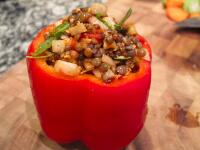 76 responses to “Why Are We Being Attacked? The Gory Details On A Dirty PR Campaign Finally Revealed.”