Jason’s Deli is one of the places my family loves to eat. When I would come home from college to visit, we would go there all the time. We’d have sandwiches, soup, salad, those little free mini corn and gingerbread muffins and free ice cream at the end of every visit. The prices were economical which suited my Dad’s frugality and the location was super convenient. But as soon as I started figuring out what was in restaurant food, my trips to Jason’s Deli stopped. I didn’t really have a specific reason other than the fact that home prepared meals tasted better and made me feel great – much better than the days I would go out to eat. 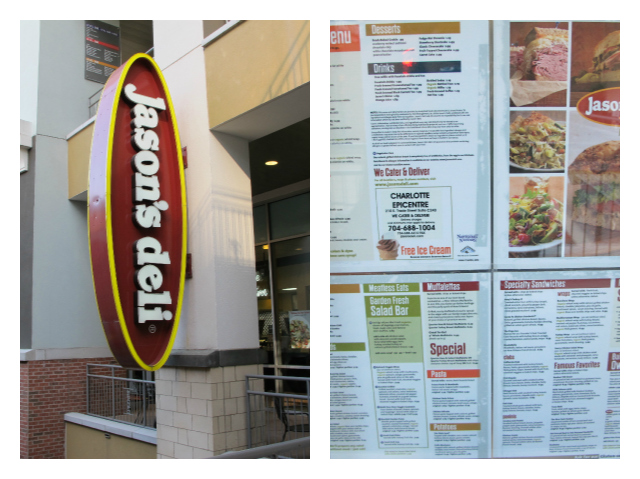 Jason’s Deli is a very popular choice for a lot of people out there, not just my family, so I thought it would be crucial to investigate their food. Besides, many of you have asked for this specific investigation on facebook for quite some time now… so with no further delay, here’s what I found out.

On paper Jason’s Deli appears to have your health in their best interest. Jason’s Deli was the first major restaurant chain to eliminate transfat and high fructose corn syrup. They recently claimed to have eliminated MSG too (we will address that later) and 1/5 of Jason’s Deli menu is organic – an absolutely staggering statistic considering the size of the menu. They also do not use any artificial colors – another amazing feat considering all the restaurants that still do.

So this begs the question – What other ingredients should you watch out for at Jason’s Deli? What should you still be concerned about? And what’s REAL FOOD and what’s not?

Trying not to be overly exhaustive, I requested the ingredients of a sampling of some of the most popular items on Jason’s Deli’s menu. Requesting the ingredients was easy compared to some of the investigations I have done in the past. There are a couple of ways you can get your hands on the ingredients.  You can call the headquarters and request them, email them or ask in the store. If you ask for the ingredients in the store, it is a quite laborsome for the employees as they have to dig for the packages to show you the ingredients on actual boxes. Unfortunately, they do not have a list in a neatly organized binder. During the several requests I made using all of these methods, Jason’s Deli employees (in the stores and at the headquarters) were amazingly cooperative and made sure I got all the answers I was looking for – a huge win in my book. However, posting their ingredients online for everyone to see would be an even bigger win in transparency, especially considering their tag line “We are all about healthy food.” Until then, I’ve posted the ingredients that I inquired about below, so this can serve as your online guide until they do…. (please note: the ingredients highlighted in red are either potential genetically engineered or GMO ingredients, harmful additives or preservatives – in other words, things no one should willingly want to eat.)

***Update: After releasing this investigation, Jason’s Deli posted all ingredients online with an Interactive Nutrition Menu – a huge win in transparency!*** 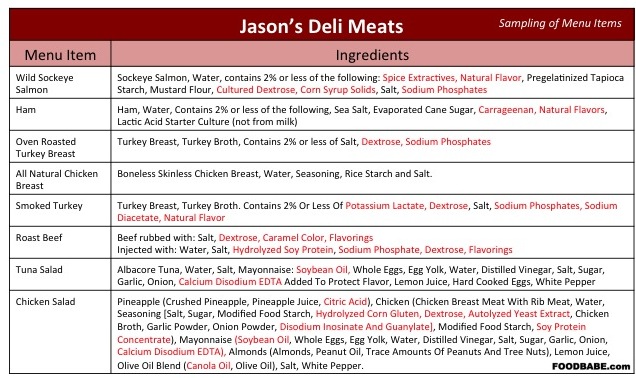 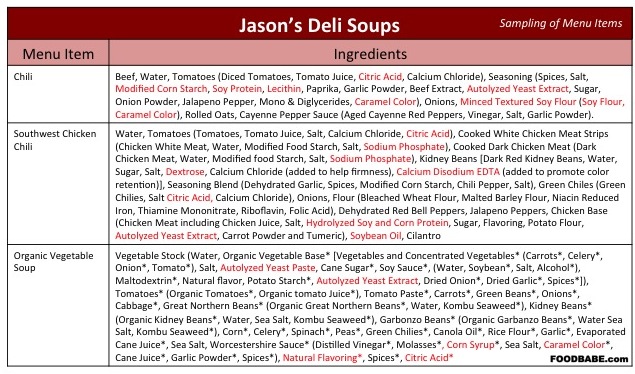 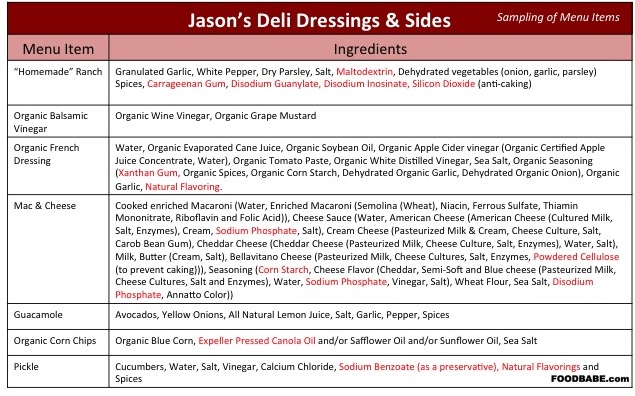 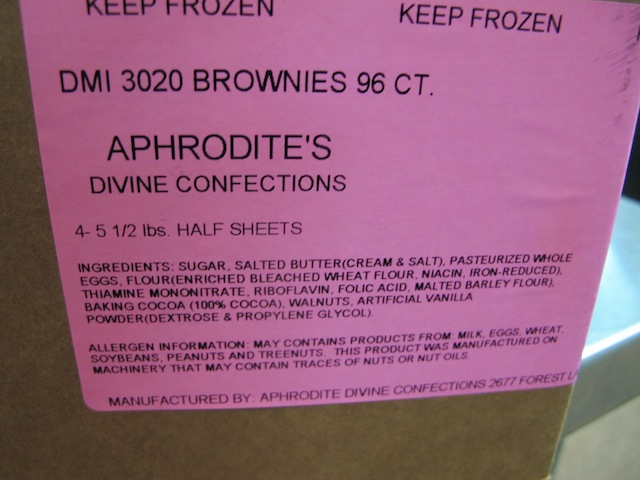 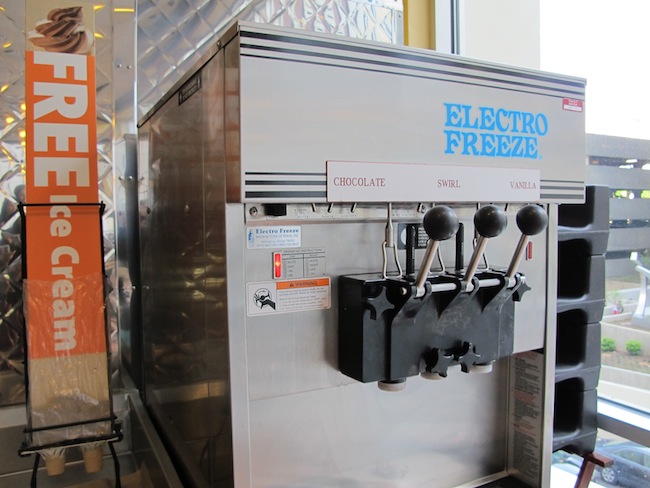 Given all this information, the obvious question now is…

WHAT WOULD I GET AT JASON’S DELI?

Straight off the menu, I would feel pretty good about ordering the Nutty Mixed Up Salad (likely without the chicken) and Spinach Veggie Wrap. Also I would excitingly order all the organic vegetables currently available (which are: spinach, mixed greens, apples, carrots and peas) at the salad bar and top it off with a huge side of guacamole and hummus. I’d also get the steamed veggies if I were feeling like I wanted something warm to eat. (Note the zucchini that is offered in the steamed veggies may be GMO since it is not organic.)

For the kids in your life (if ordering off the kid’s menu), I’d go with the Organic Peanut Butter & Jelly or the Organic Grilled Cheese but with organic whole wheat wrap or 9 grain artisanal wheat bread vs. the whole wheat bread that has additives (as discussed above). Organic carrots and organic apples on the side are a wonderful accompaniment too!

I know I stopped going to Jason’s Deli a while back but given the opportunity to dine there again, I wouldn’t think twice. It’s a no brainer – Jason’s Deli blows away the competition when it comes to quick, easy and organic meals without having to visit a grocery store.

If you think this post can help someone make the right decision the next time they visit Jason’s Deli – please share it with them. I want this information to be out there helping as many people as possible who would not otherwise know or understand the ingredients they are eating.

Thank you in advance for spreading the word.

5/1 Update: Just received the ingredients in the famous “free” mini muffins at the salad bar…I would stay far, far away!

Why did this photo go so viral? The food additive now linked to major allergies. 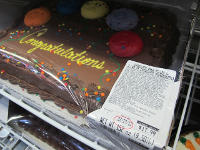 10 “Healthy” Foods That Are Actually Just Loaded With Sugar!