You never cease to amaze me Food Babe Army! The power you have to change the world is incredible. I just received confirmation that Whitewave Foods, who owns Horizon and Silk, will be removing all carrageenan from their products in 2015. 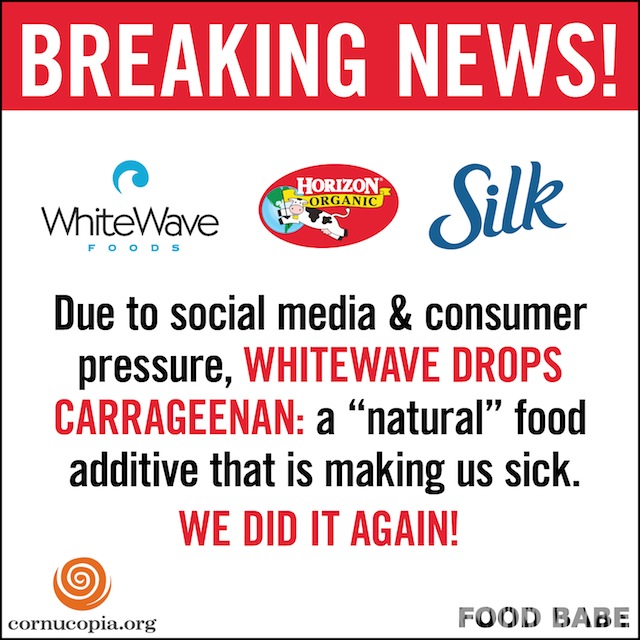 Earlier today, I received an anonymous email that stated:

“To whom it may concern, Through friends I have made in the industry an announcement from Whitewave was shared with me regarding their removal of Carrageenan from their products. Due to the overwhelming pressure from consumers and encouragement from your website foodbabe.com, Whitewave has announced that they will be removing Carrageenan. Keep up the good work. Attached you will find the announcement letter from Whitewave regarding this”.

Along with this attached document from Whitewave Foods:

We are removing carrageenan from our Horizon and Silk products!

It was just reported by the Associated Press via ABC News that they decided to remove it “because customer feedback has been so strong“. Yes, it is because of all of YOU and your resounding voices, they have decided to make this positive change. This is in direct response to your continued activism in holding companies accountable for the ingredients they put in their products.

Carrageenan Should Be Removed From All Food – Here’s Why:

I first wrote about this controversial additive back in May of 2012 when a cousin of mine asked me to investigate this ingredient. I highlighted research from food industry watchdog group, The Cornucopia Institute, who completed an in-depth analysis regarding the safety of this ingredient and subsequently petitioned the FDA to remove the additive from the “Generally Regarded As Safe” or GRAS determination and from organic foods all together.

In their report, they explained why even food-grade carrageenan is dangerous, yet how many food companies have continued to unscrupulously add it to their products. According to Cornucopia, animal studies show that “food-grade carrageenan causes gastrointestinal inflammation and higher rates of intestinal lesions, ulcerations, and even malignant tumors”. It can also cause cancer, because food grade “undegraded” carrageenan is contaminated with “degraded” carrageenan (the kind that’s not considered “food grade”). The World Health Organization’s International Agency for Research on Cancer and the National Research Council of the United States have both determined that degraded carrageenan is a carcinogen. So, it clearly should not be in our food – but it still is.

As reported this week in the Washington Post, Joanne Tobacman, a physician and professor, “asked the FDA in 2008 to examine the additives safety, submitting five of her own studies concluding that carrageenan can cause inflammatory bowel disease and diabetes. The studies were financed with grants from the federal government. The FDA denied her petition, citing several other industry-funded studies that contradicted her findings“.

Since the FDA won’t do anything to get carrageenan removed from our food, it is up to us to make this happen.

Other Companies Are Guilty, But This Can Be Changed.

I’m so thrilled that Whitewave made this announcement, because this will likely lead to other companies following suit. Mark Kastel of The Cornucopia Institute has been working on this issue for years, and says that Whitewave’s decision reflects the rise of “people power” – which is so true. We do have the power to enact big changes in the food industry and this is proof of that.

Let’s help to be part of this sweeping change to remove carrageenan from our food supply by avoiding all products with carrageenan and ask companies who are still using it to drop it.

In this shopping guide, created by The Cornucopia Institute, you’ll find a list of all companies guilty of using this ingredient. If one of your favorite products is listed, please do your part and contact that company and ask them to remove it. If you know of other companies that are still using carrageenan, list them in the comments below.

FDA Asleep At The Wheel!

Whitewave’s announcement proves targeting companies works much faster than targeting the FDA. Michael Taylor, FDA’s deputy commissioner for food, even admitted this week that “We simply do not have the information to vouch for the safety of many of these chemicals” and “we do not know the volume of particular chemicals that are going into the food supply.” The FDA is completely asleep at the wheel. It’s up to us to hold these companies accountable and that’s exactly what we are doing.

You are so awesome. Congratulations Food Babe Army! We are changing the food system once again.

Sending you lots of love and courage to keep moving forward,

P.S. If you are new to Food Babe and want to change the food system, come on over and sign up here, it’s completely free! 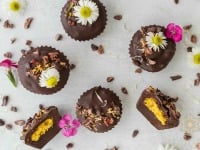 Watching Your Weight? Don’t Eat This For Lunch.

This Ingredient Isn’t Food, But Most Americans Eat It.

388 responses to “BREAKING: Major Company Removing Controversial Ingredient Carrageenan Because Of You!”