If you feel like you don’t have the power to get food companies to drop nasty chemical ingredients from their food, I have news for you! Every time you share the truth about these products with your friends you are making a huge difference. Food companies are listening and they are changing. Here’s proof!

A few years back I shared several graphics showing how companies like Kraft-Heinz, Kellogg’s, PepsiCo, and Quaker sell safer, better products overseas while making inferior versions with different ingredients to sell to Americans. You may have seen them. These graphics have gone viral and are still being shared all over the internet. (1)

I know you’re as appalled as I am, because every time I write about this I get tens of thousands of shares and hundreds of emails asking how we can get these companies to stop selling us inferior products here in the U.S.

I wrote about this (and specifically Quaker’s oatmeal) in my bestselling book Feeding You Lies, which has been read by thousands of people. And my U.S. vs. U.K. comparison graphics have been picked up by the media numerous times. (2)

Now I’m happy to say that because of YOU sharing this information and voting with your dollars, companies are changing.

Sometime in the last year, Quaker quietly changed the ingredients in their Strawberries & Cream Oatmeal here in America.

And the change is DRAMATIC…

Compare the previous version to the current 2021 version to what they’ve been selling in the U.K. this entire time: 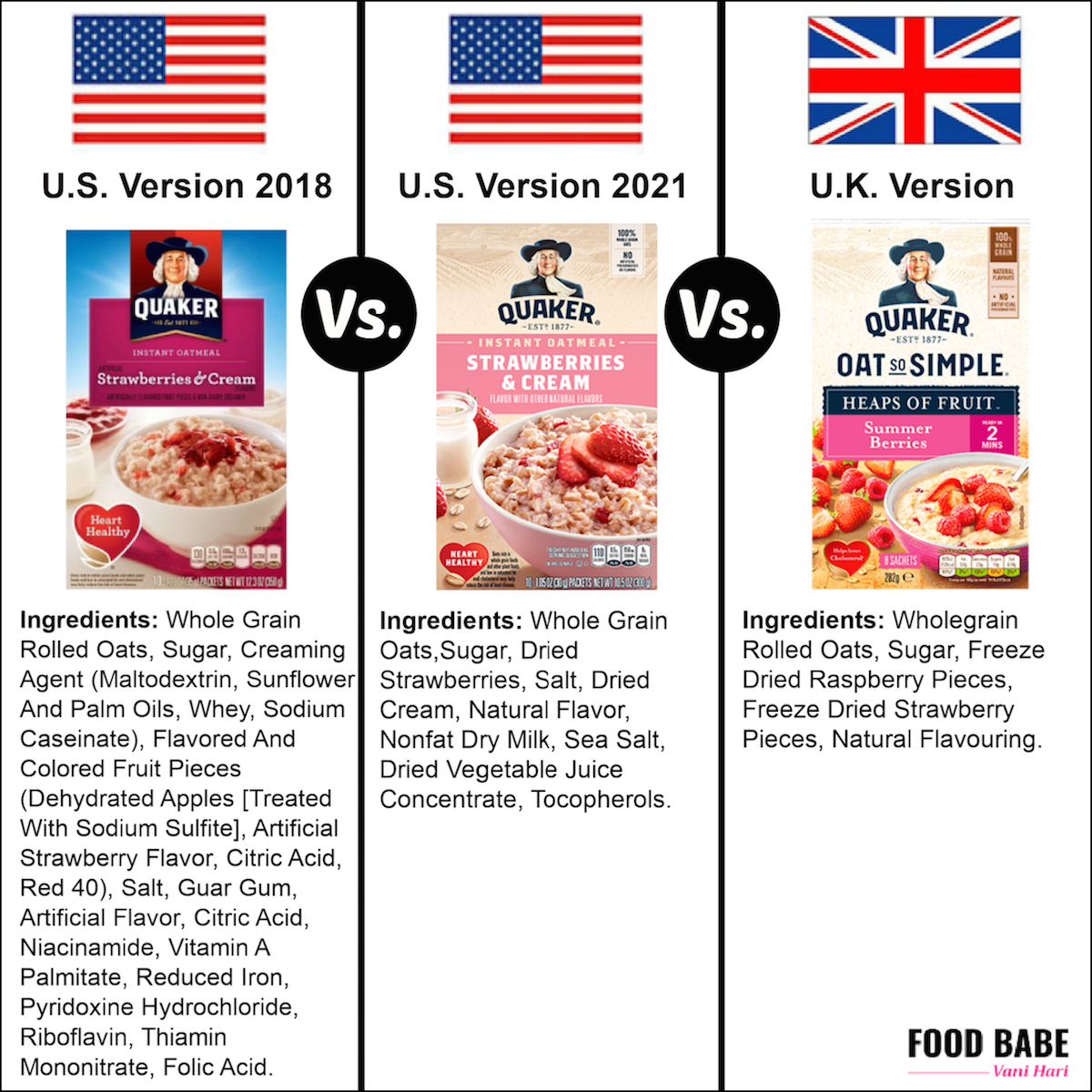 Quaker Strawberries & Cream in America originally had NO strawberries at all. Instead they used “Flavored and Colored Fruit Pieces” composed of dehydrated apples, artificial strawberry flavor, citric acid, and the artificial dye Red 40. A total scam! (3)

In the U.K. Quaker doesn’t even attempt to sell that garbage and doesn’t make any products like this. The closest counterpart they have is a product called “Oat So Simple” that has REAL strawberries in it—light years ahead of the popular U.S. version that has been on the market since I was a child. (4)

This is a huge deal! Not only are they using real food ingredients instead of conning consumers with fake strawberries, but they are no longer using artificial colors. Artificial colors are one of the absolute WORST ingredients in our food and should be banned. Especially since they are usually in products made for children.

Quaker did the same with their other instant oatmeals too! 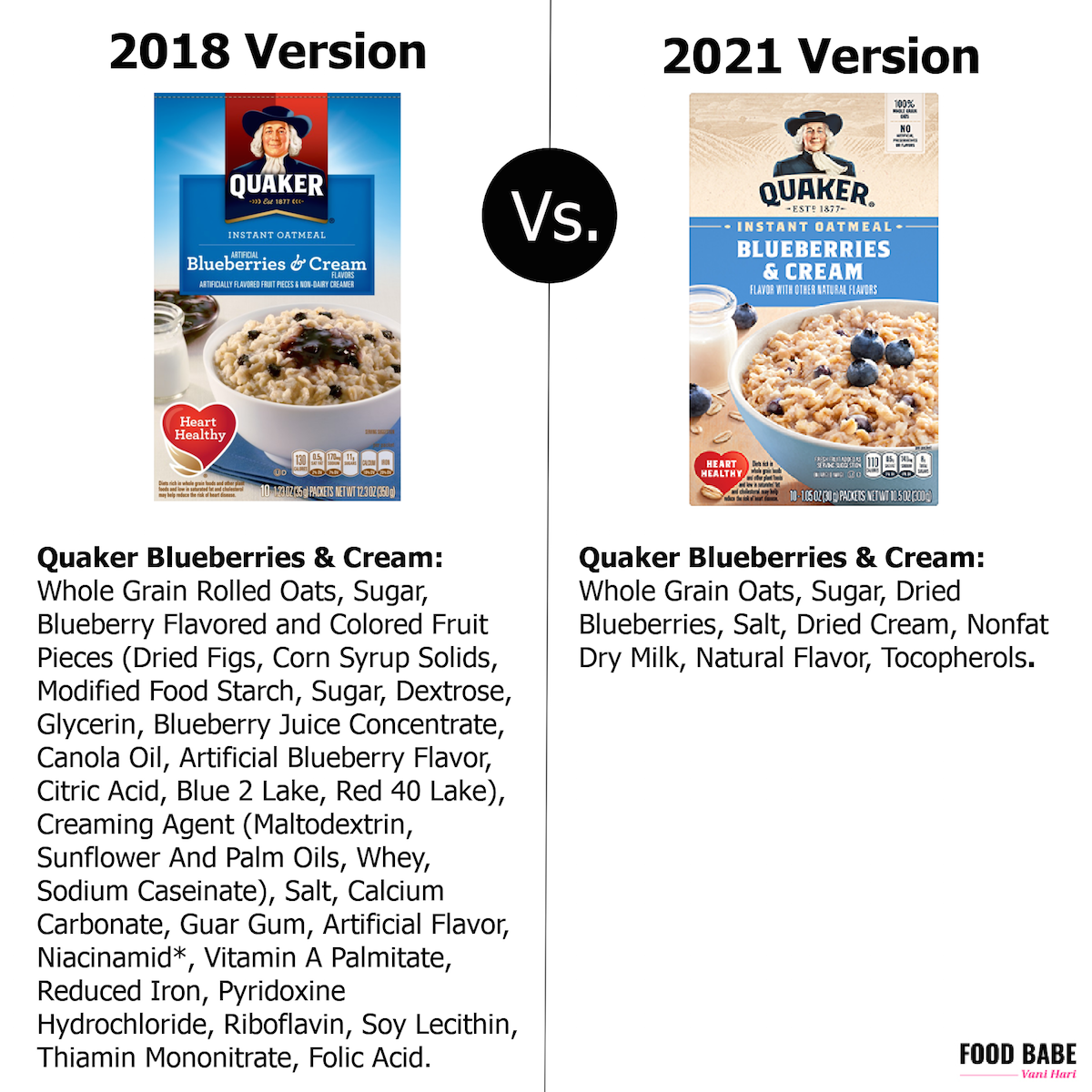 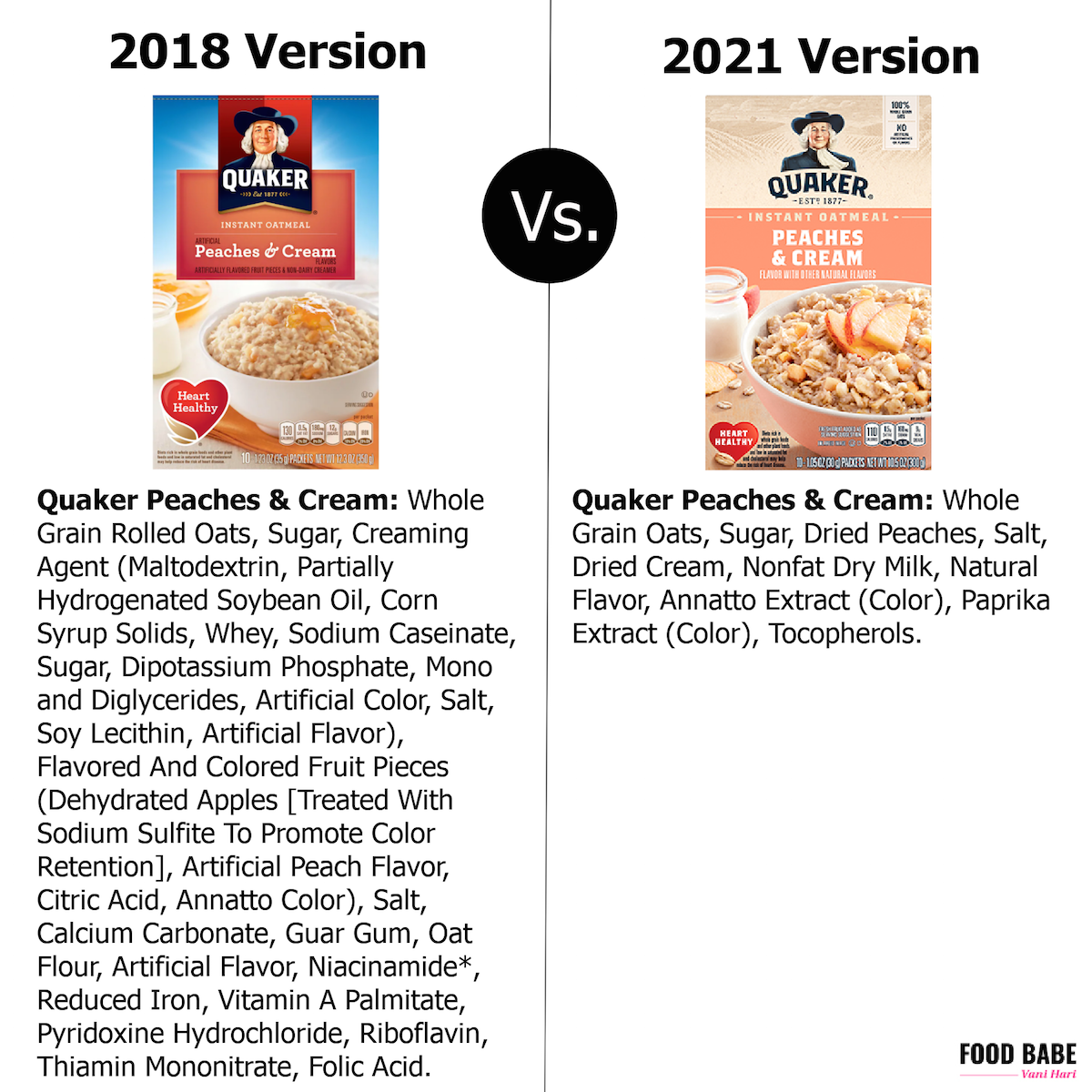 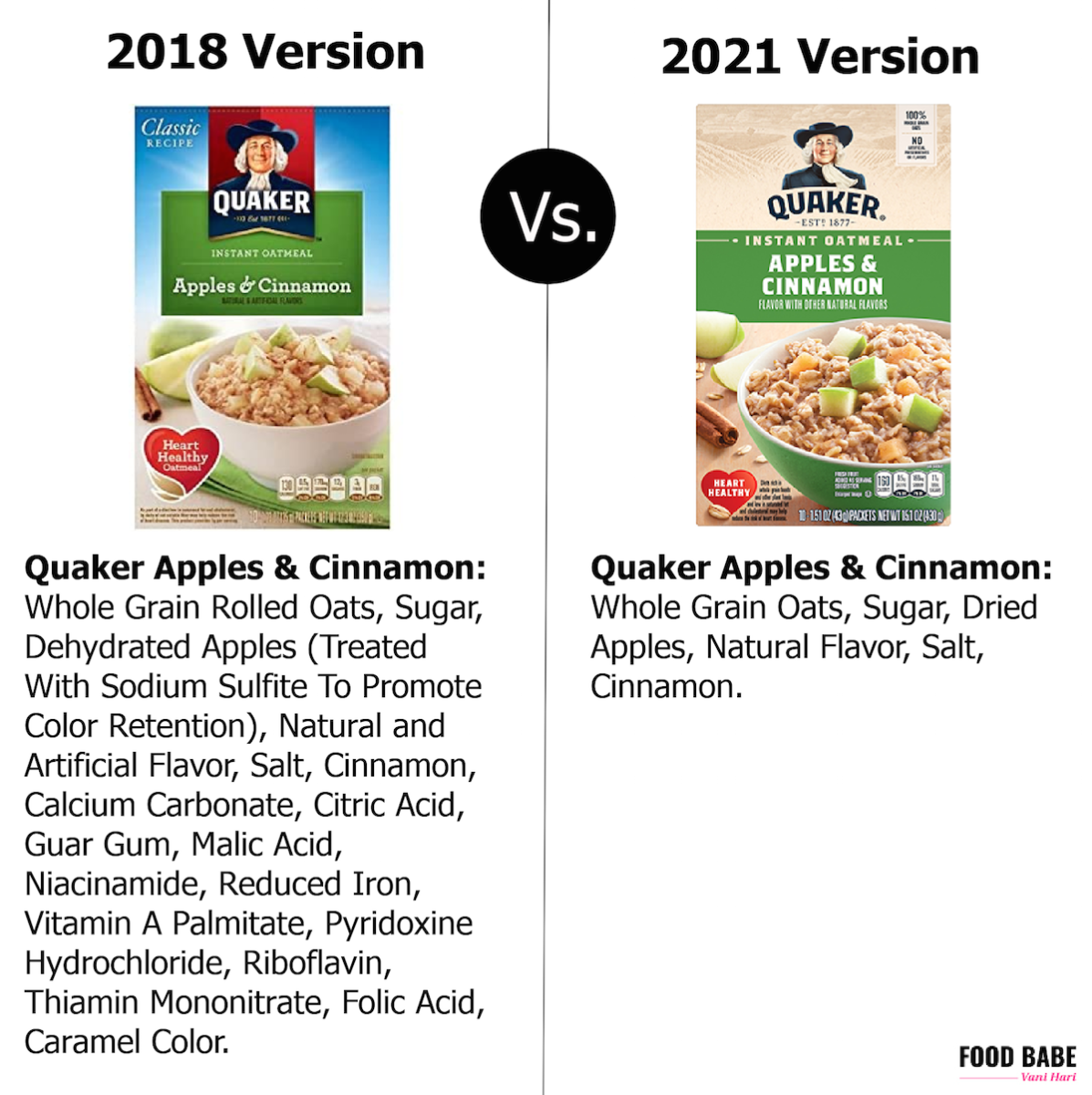 And, they removed the artificial colors and caramel color linked to cancer (7) from Dinosaur Eggs Instant Oatmeal for kids, and replaced these with natural colors made from radishes, spirulina, and turmeric. 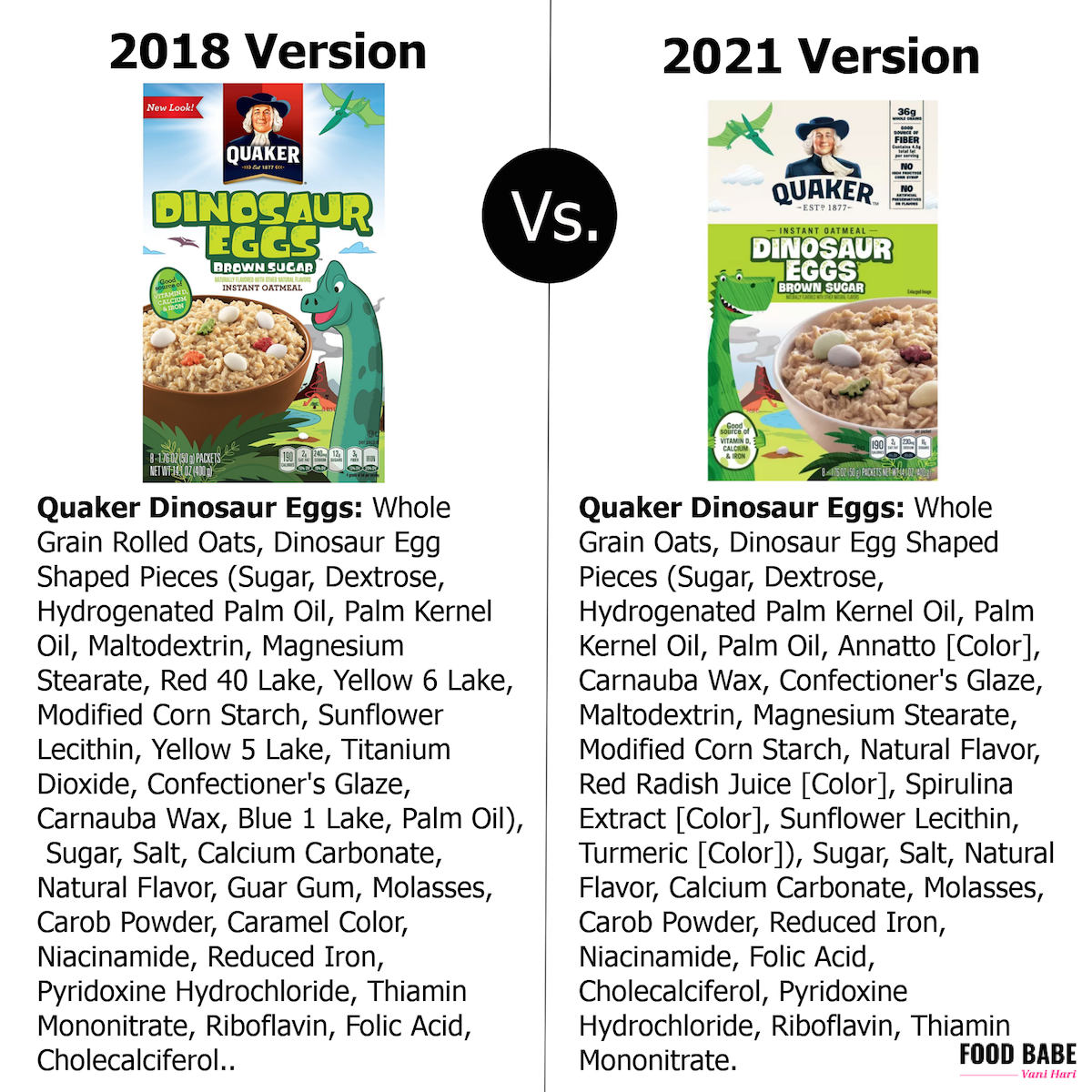 I believe this never would have happened had we not shared the truth about their products and raised awareness!

They aren’t the only one who has changed their ingredients…

Since our graphics came out, there are a couple more big changes.

Frosted Flakes dropped the controversial preservative BHT from their cereal (which is linked to cancer), so it’s now like the U.K. version. 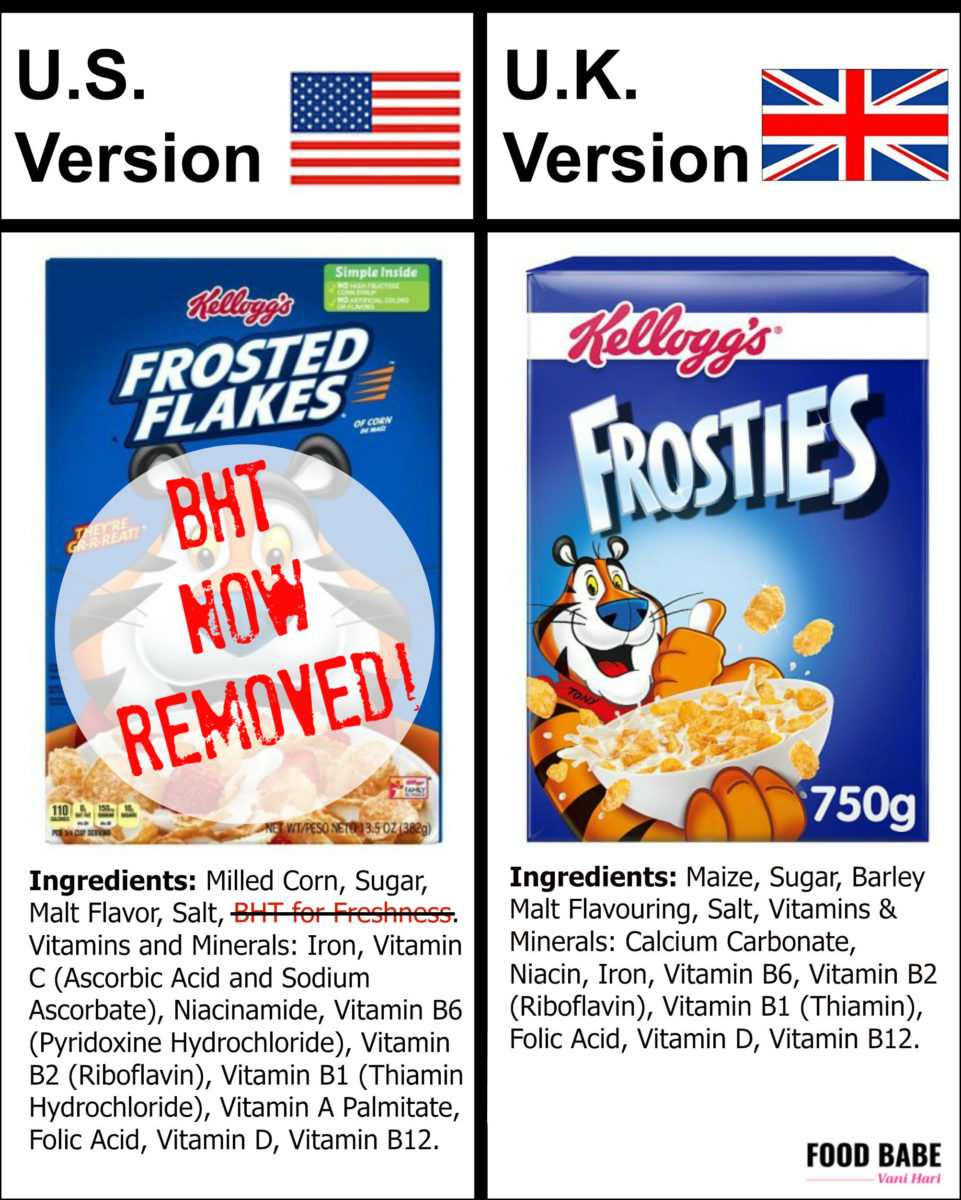 We have petitioned Kellogg’s TWICE asking them to remove the preservative BHT from their cereals, as they don’t use this ingredient in other countries, it’s linked to cancer and it’s unnecessary.

Our first petition in 2015 received over 53,000 signatures (8), and Kellogg’s removed BHT from popular cereals like Rice Krispies. Now it’s finally out of Frosted Flakes.

But, they didn’t remove BHT from all of them. And they started inventing even worse cereals for children with artificial colors and BHT, like Baby Shark Cereal. That’s why we petitioned them again a couple years ago. We will not stop until they change.

SIGN THE PETITION: Add your name here and demand that Kellogg’s stop making cereal for children with these controversial ingredients!

Mountain Dew FINALLY removed brominated vegetable oil (BVO), but it still contains yellow #5 and other controversial additives not found in the U.K. version. 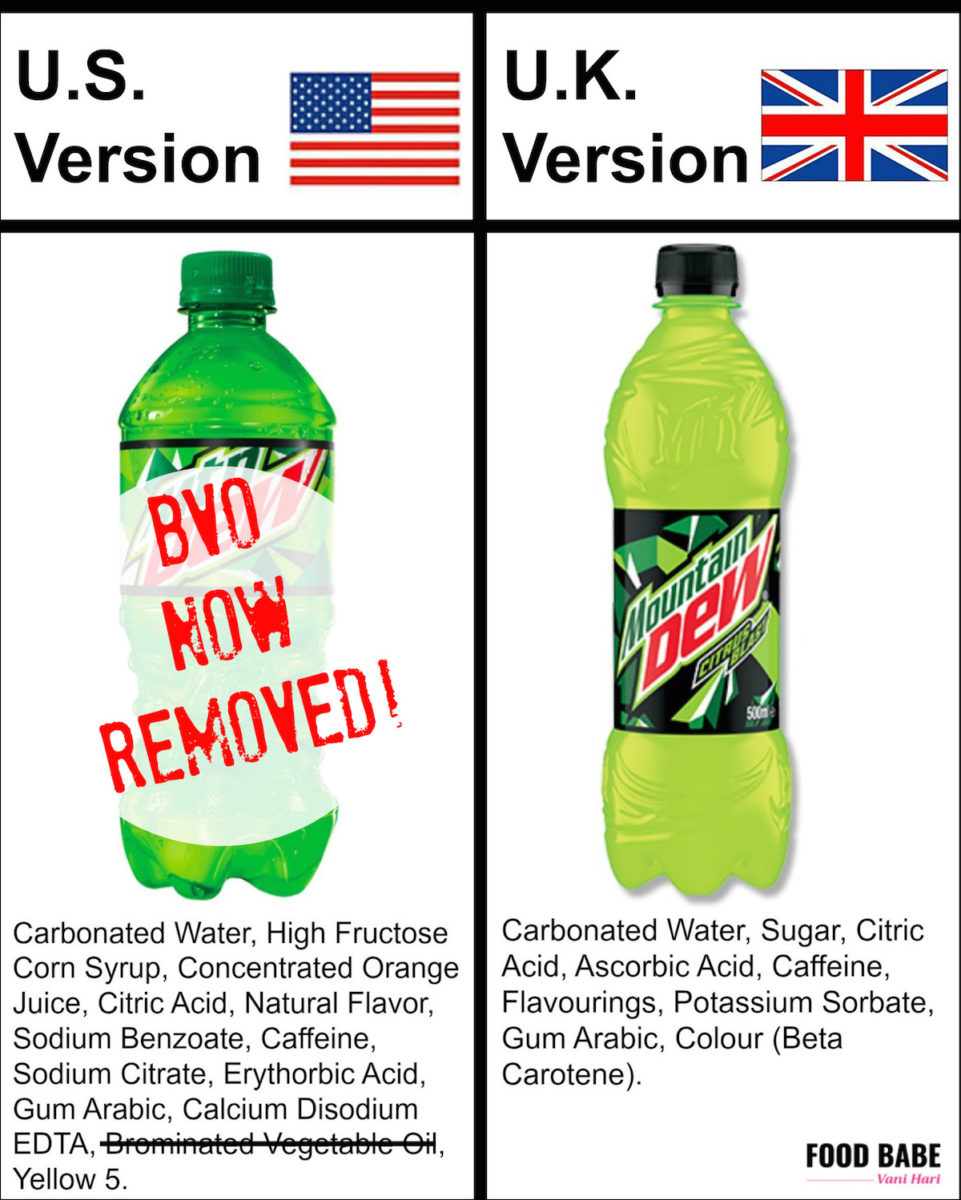 Brominated Vegetable Oil (BVO) is an ingredient BANNED in Europe, so Pepsico has sold Mountain Dew in other countries without it for years. In 2014, PepsiCo told the media they would remove BVO from all of their American drinks following a viral petition by activist Sarah Kavanagh, but they actually didn’t do it. (9)

I’m happy to see that after years of public pressure, the BVO is gone!!!

So, keep sharing, sharing, and sharing the truth about our food.

Continue sharing the ingredients in processed products with your friends and vote with your dollars by refusing to buy products from these companies until they do the right thing.

We are making a real difference! The Food Babe Army is AMAZING. I love you all so much. 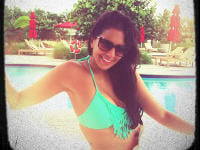 Take a peek inside my new cookbook, Food Babe Kitchen (Watch this video as I flip through the whole book)

My Favorite Moments From 2016 – See Which Food Companies Are Dropping The Toxins!