The thousands of letters I have received from parents whose children have benefited from the removal of artificial food dyes are ringing in my ear this morning. We finally did it. 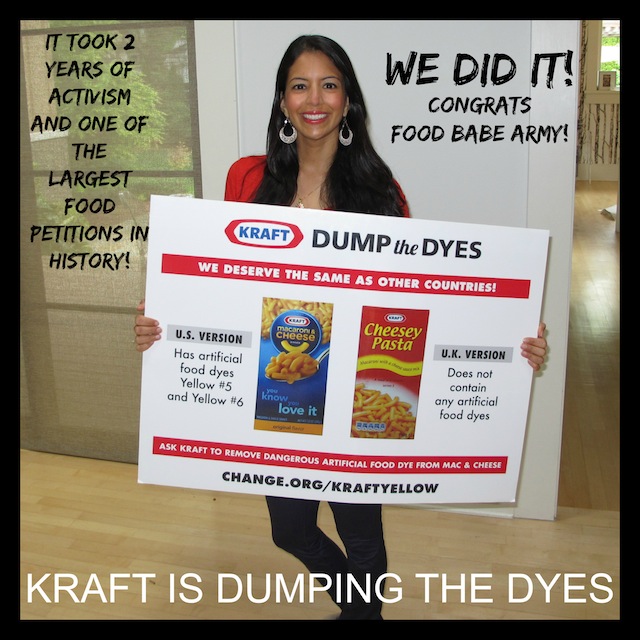 Kraft is removing all artificial food dye from every kind of their mac & cheese by 2016. Millions of families across the United States and Canada will finally get the same safer versions that have been available in Europe for years. The double standard is finally ending for one iconic product and hopefully several more. A million boxes of Kraft Mac & Cheese are sold everyday – that’s a lot of artificial food dye finally being eliminated from the North American food supply. We have a lot more work to do in this area but we are making some serious progress.

Please consider removing this additive from your diet because artificial dyes…

My heart goes out to everyone who is fighting for a safer food system, especially every one of you that signed this petition (all 365,000+ of you!), and of course the ‪#‎FoodBabeArmy‬ who has been actively working for this change for 2 years!

This is a revolution, consumers voices are finally being heard!

Vani Hari, petition author and founder of FoodBabe.com, celebrated Kraft’s announcement. “This is a revolution – consumers voices are finally being heard.”

“This is a crucial first step on removing an unnecessary but potentially harmful additive from the food supply, millions of children could be affected by these artificial food dyes,” said Hari. In Europe, artificial food dyes require a warning that states; “May have an adverse effect on activity and attention in children.” This is required because of scientific studies conducted by European Safety Officials.

The Center for Science in The Public Interest has petitioned the FDA to ban these artificial food dyes because risks include hyperactivity in children, cancer (in animals studies) and allergic reactions. The British government and European Union have taken actions that are virtually ending the use of dyes throughout Europe.

“Consumers have been telling us, and parents in particular, that they want to feel good about the foods that they eat and that they serve their families,” Triona Schmelter, Kraft’s vice president of marketing for meals, told the Chicago Tribune.

Kraft’s announcement comes as many companies are removing artificial food dyes, including Hershey’s and Nestle.

“To be part of such a monumental turning point in the removal of artificial food dyes from the food system and to help raise up the voices of over 365,000 people is an incredible honor,”

“I hope Kraft’s decision to remove these artificial food dyes from Mac & Cheese continues throughout their entire product line including JELLO, Kool Aid and across the industry,” commented Ms. Hari.

“This is a real turning point for the food system – I thank the hundreds of thousands who joined the petition and the researchers and activists who have been pushing for this across the world for many years.”

The food industry, of course, is not too happy about this kind of activism. After Ms. Hari’s book The Food Babe Way hit best selling status (which included several chapters on the risks associated with consuming food industry additives and the introduction dedicated to her activism at Kraft), they have started a campaign to attempt to discredit Ms. Hari and her followers. Some recent articles about her have failed to report that many other consumer, environmental and health groups, plus eminent scientists and doctors, are also targeting these the same synthetic ingredients. These stories also fail to report that these same substances have been tightly regulated or banned in Europe and other nations based on science. 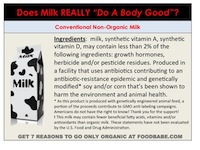 After You Read This You’ll Never Look At Milk The Same Way Again! 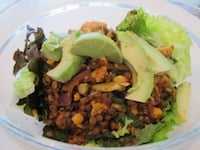