I owe a huge thanks to my Mom for inspiring me to investigate Panera Bread back in April of 2012. Every single one of my investigations into certain food products and restaurant chains has been personal or inspired by one of my close friends or relatives.

When I see the people I love eating questionable additives that have no business being in our food, I can’t help but want to educate them to what’s happening in the food supply. That’s exactly why I started this blog – to help as many people as I can get healthy and break free from the toxins in our food.

As soon as my Mom heard the news that Panera was removing 150 additives from their food, she called me and said “The fruits of your labor have paid off, I am proud of you and the Food Babe Army.”

These types of changes from major food chains are the result of the increased awareness we have been able to gain with our movement. Once you know this information you can’t unlearn it and that’s why sharing what you find out about what’s in our food with your loved ones is so valuable and changes the world. 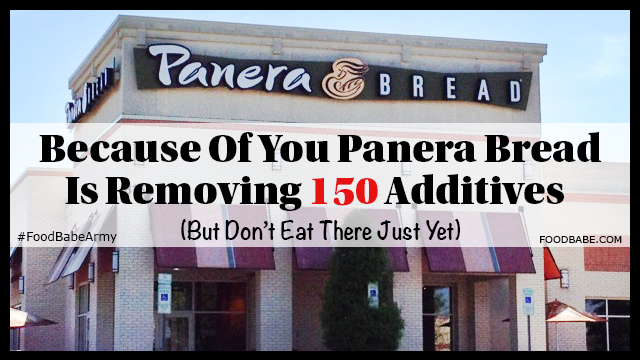 Creating Awareness Is Our Biggest Weapon As Consumers

What seemed like a simple blog post back in 2012 was actually read and seen by thousands of people because you shared it. It is that small act of sharing that can move mountains and create awareness.

And yes, another mountain of the chemical foolishness in our food is being removed thankfully by a company that cares to take a stand for better ingredients and better health.

We will soon be able to kiss these ingredients goodbye at Panera: 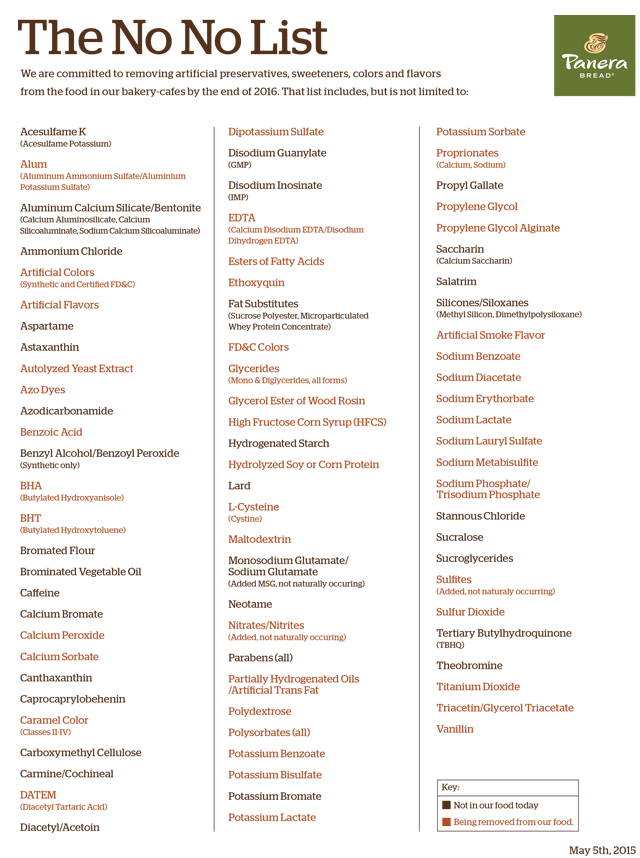 *Note: Orange text indicated ingredients are still in Panera Bread’s food and will be removed in future.

Granted, some of the additives that Panera’s removing are not believed to be harmful, but they are simply unnecessary and not ingredients that you would cook with at home. However, several of them are linked to known health risks and for that reason….

The CEO of Panera Bread is a hero for removing these chemicals and standing up for safer ingredients!

I’ve read a significant number of media reports on this recent announcement and I can tell you – some people are not happy about these changes.

I don’t know anyone in their right mind that wants to eat a long list of chemical additives vs. real food.

That is, unless they are making money off of them or advertising for them. Some are saying that the removal of these chemicals is just a “PR move” that isn’t based on “science”, in order to minimize the message Panera Bread is sending to the marketplace.

This is what Panera Bread’s CEO Ron Shaich told reporters:

“How do I want to feed my daughter?’ That’s the gold standard question and when I answer that, it tells me what I want to do for my customers. Because my customers are no different than my daughter.”

If food industry executives would put themselves in the shoes of real people they would make totally different decisions and that’s why we need to keep on the pressure and make our voice loud and clear.

I love how Panera Bread reached out to consumer protection organizations like the respected Environmental Working Group and NRDC to implement these changes. I wish more companies would work with these science-based consumer focused organizations to evaluate the impact of their ingredients.

Some of the ingredients Panera Bread is removing have very important risks that the media should be covering, like these:

Artificial colors: Fake colors like Yellow #5, Red #40 and caramel coloring are on EWG’s list of top 12 food additives to avoid. The Scientific American recently reported that evidence has revealed that artificial food dyes do have capacity to harm and for that reason they should be banned by the FDA. Also caramel coloring is associated with cancer – reason enough to leave this unnecessary ingredient out of our food.

Butylated Hydroxytoluene (BHT): This controversial synthetic preservative is considered by the FDA to be safe in small amounts, but it’s added to an insurmountable number of products. Not only will you find it in cereals, chewing gum, and crackers, but it’s widely used in animal feed, plastics, pesticides, paints and cosmetics. Due to its prevalence, BHT has been shown to contaminate our environment (including meat & dairy products) and no one knows exactly how much of it we are really ingesting. BHT is linked to cancer in animal studies and believed to be an endocrine disruptor that interferes with hormones. Our petition to get BHT out of the most popular cereals in this country has received over 50,000 signatures, and is continuing to inspire change.

Partially hydrogenated oils: One of the worst ingredients in our food that the FDA still hasn’t banned. The CDC links these artificial trans fats to up to 20,000 heart attacks every year!

Hidden MSG: Ingredients like hydrolyzed proteins and yeast extracts are used as flavor enhancers by the food industry, because they have the same active ingredient as Monosodium Glutamate (MSG) but look “cleaner” on the label. These unnecessary additives are used to make processed food taste better, can cause you to overeat, and are linked to neurological disorders according to Dr. Russell Blaylock in his book, “Excitotoxins: The Taste That Kills”.

Sodium Phosphate: This popular preservative is in a ton of processed food, and when you eat too much it can elevate the phosphate level in your blood. High phosphate levels are associated with increased mortality (even in healthy people), kidney disorders, heart disease and accelerated aging.

High Fructose Corn Syrup: This type of sweetener has been shown to contribute more to obesity and diabetes than regular cane sugar (sucrose).

So how did The Food Babe Army inspire these incredible changes?

In 2012, I first exposed what’s really in Panera Bread’s Fuji Apple Salad, which sounds healthy but is heavily processed and loaded with genetically modified (GMO) ingredients like corn syrup and canola oil. The Greek Salad Dressing has propylene glycol in it, which is also sometimes used in antifreeze, can be toxic in large doses, and it is simply “less toxic” than traditional antifreeze (ethylene glycol) according to the EPA. I wrote about Panera’s ham sandwiches (including the one on their kids menu), which comes with a dose of nitrates, linked to Alzheimer’s and stomach cancer. I also divulged the dirty details about the hidden MSG in several of their menu items including their Broccoli & Cheese Soup and Low Fat Black Bean Soup. None of these artificial additives are necessary, and there’s safer alternatives available. After this investigation it was clear that Panera Bread didn’t deserve the title of the “#1 Healthiest Fast Food Restaurant in America” and these aren’t ingredients that I wanted my Mom to be eating!

In June of 2014, after thousands of people read the initial blog post and shared it with their loved ones, Panera Bread finally announced that they would commit to removing all artificial colors, sweeteners, preservatives and flavors by 2016. I was interviewed by CNBC at the time, and called on other major restaurants like McDonald’s to do the same (which I hear they are working on).

Now, almost exactly 3 years since my initial investigation, Panera Bread is finally doing what needed to be done a long time ago!

But, don’t eat there just yet! A word of caution before you eat at Panera.

While I’m so thrilled to see Panera take such a huge step, I realize it’s only a start and we have a long way to go. Many of the ingredients listed above are not slated to be removed from their food until the end of 2016. That’s over a year and a half away!

What will still be in Panera’s food that I’m concerned about?

It’s important to note that Panera Bread still plans to use some genetically modified (GMO) ingredients. Several of their menu items likely contain GMOs, and it’s not labeled on their menu. The good news is that they list their complete ingredients online, so you can always check there and avoid items that contain ingredients that are usually GMO, such as:

There’s a complete list of common GMO ingredients here, for you to use as a reference. Ideally, Panera Bread should go organic, because there’s a huge difference between non-GMO and organic food (and organic food is always the best choice).

Panera also didn’t announce that they are removing carrageenan from their food. According to Cornucopia Institute and several doctors, this ingredient causes gastrointestinal inflammation and causes real problems for many people. I would definitely avoid menu items that include carrageenan as well.

Who’s Next? This wave of change can’t be stopped.

Chemical additives are dropping from food faster than I ever thought was possible. Let’s keep the momentum going. Share this blog post with everyone you know, including restaurants that you want to see make positive changes like these. It was just reported last week that Wendy’s is going to start serving organic iced tea. Wouldn’t it be amazing if they also cleaned up their food like Panera is doing, offered some more organic options and went antibiotic-free? Let me know in the comments below which restaurant you want to see change. I can’t wait to see who’s next. 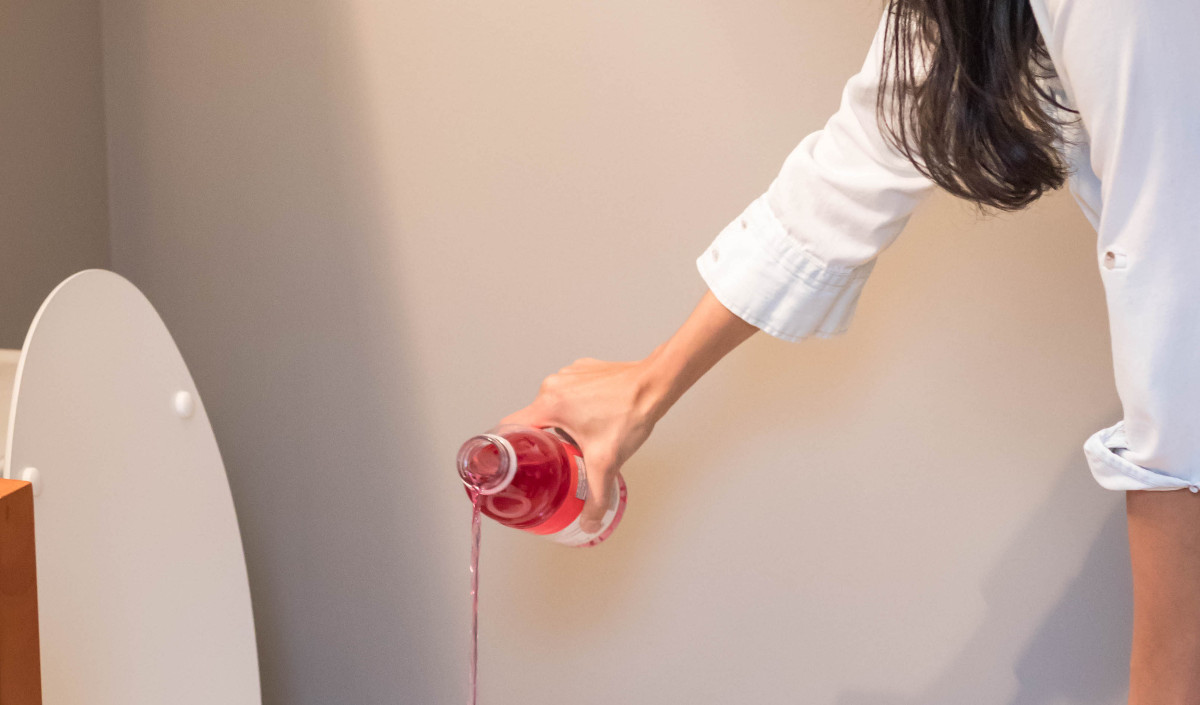 Are you a victim of healthwashing? (Find out the ways food companies trick you) 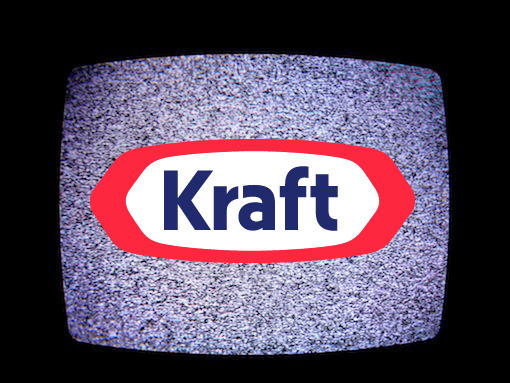 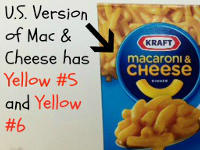 201 responses to “Because Of You, Panera Bread is Removing 150 Additives (But Don’t Eat There Just Yet).”