I got a request to be on CNN last Sunday night asking me to discuss the romaine lettuce E. coli outbreak. But here’s the crazy thing…

My appearance on national TV really pissed off some people. And no – not because it was on CNN. (My stance on national media has always been to take the opportunity to spread the truth, no matter what outlet).

So why would anyone be enraged that I went on TV to talk about lettuce? 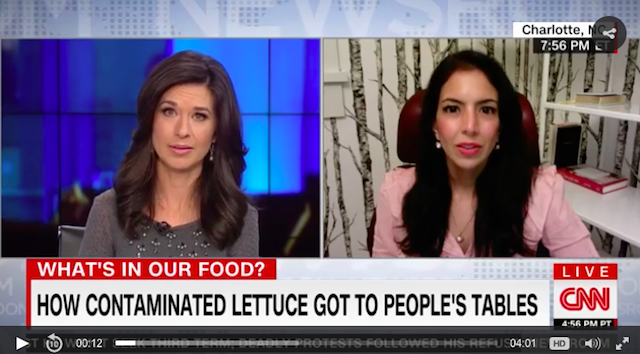 There are a band of food industry people who follow my every move and do whatever they can to bring our movement down. This includes people who work with Big Food and chemical corporations and public relations firms who represent these companies. They don’t want an activist like me to have an audience and to tell people the truth about our food supply. This threatens their profits… and when you are a threat, you become a target. It can be scary at times, but I do my best to not let it sway me.

So after my appearance on CNN last weekend, I found myself again being targeted with a tactic called “astroturfing”. This is something they have done to me in the past, often after I make a big public appearance or launch a successful campaign or petition.

Astroturfing is a fake grassroots movement, which is used to make it look like there is either widespread support or disapproval of a person, issue, or company – even if there is not.

When an astroturf campaign is launched, it will look like there are swarms of people on one side of the issue, when in all actuality, it is a small group of people working together backed by public relations firms or special interest groups. Astroturfing is designed to shape and distort media messages to fit a industry-friendly narrative and manipulate public opinion.

For instance, when we petition a Big Food company and ask them to drop a harmful additive from their food, hundreds of social media profiles (some real, some fake) are activated and flood Facebook with messages in opposition to what we are asking the company to do. When we asked In-N-Out Burger to stop the routine use of antibiotics, several profiles came to In-N-Out’s Facebook Page and told them specifically not to change and not to listen us “fear mongers.” The same happened when we wrote about the risky additives in Boar’s Head deli meats and asked them to improve.

Astroturfing also happens behind the scenes and off of the pages of social media. When I am invited to speak at events, a swarm of social media profiles spam the organization who invited me to speak. When I was on the cover of Experience Life magazine and when Yahoo Health featured me in some videos, they tracked down the editors of these publications and swamped them with complaints. It appeared on the surface that the complaints were coming from dozens of separate individuals, but it was actually a small group of people working together to make it appear that way.

If you’ve been following me for awhile, I’m sure you’ve seen astroturfing in action…

The shocking insults and name-calling…

After you’ve seen it a few times, it becomes glaringly obvious.

Astroturfing is effective because it diverts attention away from the REAL ISSUES.

It encourages people to talk smack about a person – like Dr. Oz is a “quack” and Food Babe is a “fearmonger” – versus the real issues of having Roundup weedkiller in our food and artificial dyes in our mac n’ cheese. They fear an honest discussion with what’s wrong with these chemicals in our food.

To show you what I’m up against, this is what happened after I was on national TV this week…

An astroturfing campaign was kicked off by a woman who calls herself “Farm Babe” (wonder where she came up with that name?!). She is a conventional farmer who has worked as a “social media influencer” for Domino’s Pizza, Arctic Apples (GMO), Tyson Foods, and Elanco (maker of livestock drugs). She writes a regular column in Ag Daily – a publication backed by Monsanto and Bayer. Numerous makers of conventional farm feed and GMOs have hired her to speak at their events. She is literally working directly with Big Food and Ag brands. She also has a personal stake in the industry. On her farm she grows corn, soybeans, alfalfa and raises conventional beef on a feedlot that uses grains and growth hormones.

She works with many of the big players in Ag who are proponents of factory farming – something I want to change – so of course, she does not like what I stand for. So it was no surprise that she posted this on her Facebook page after my appearance on CNN: 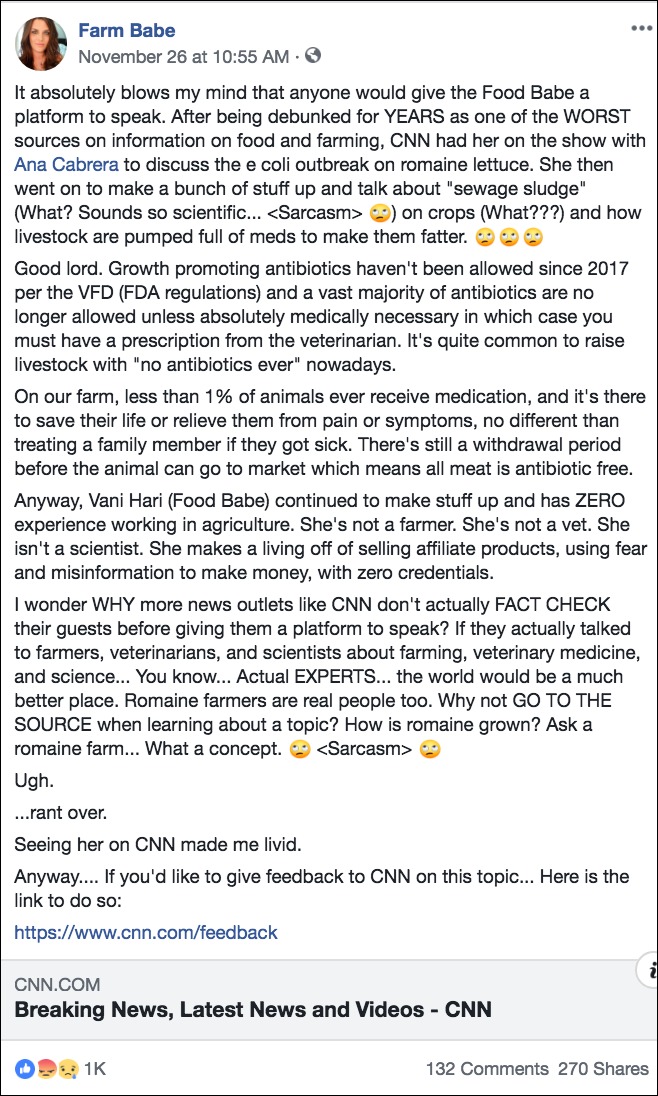 I’ll address her comments about sewage sludge and antibiotics, but as you see below, her post engaged a swarm of people to send emails to CNN to complain about me and tell them to never have me on their network. Here are just a handful of responses to her post: 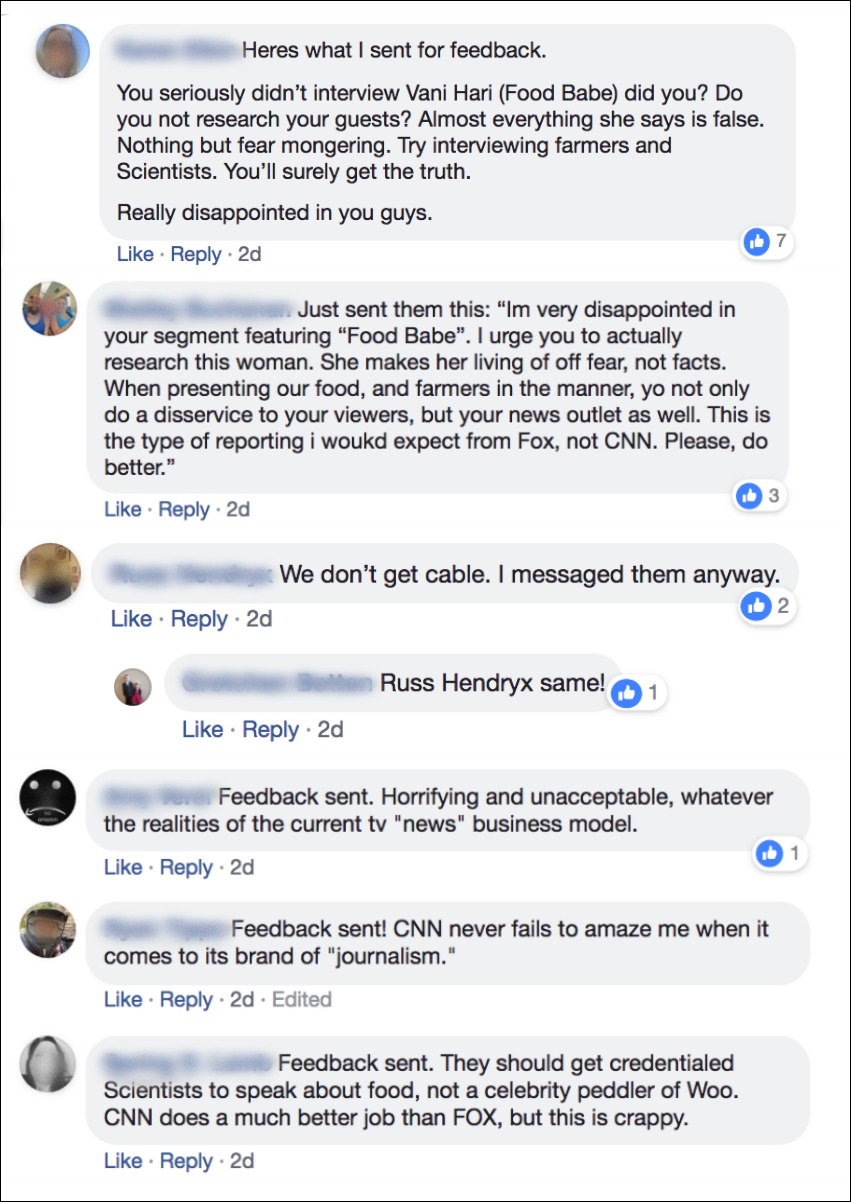 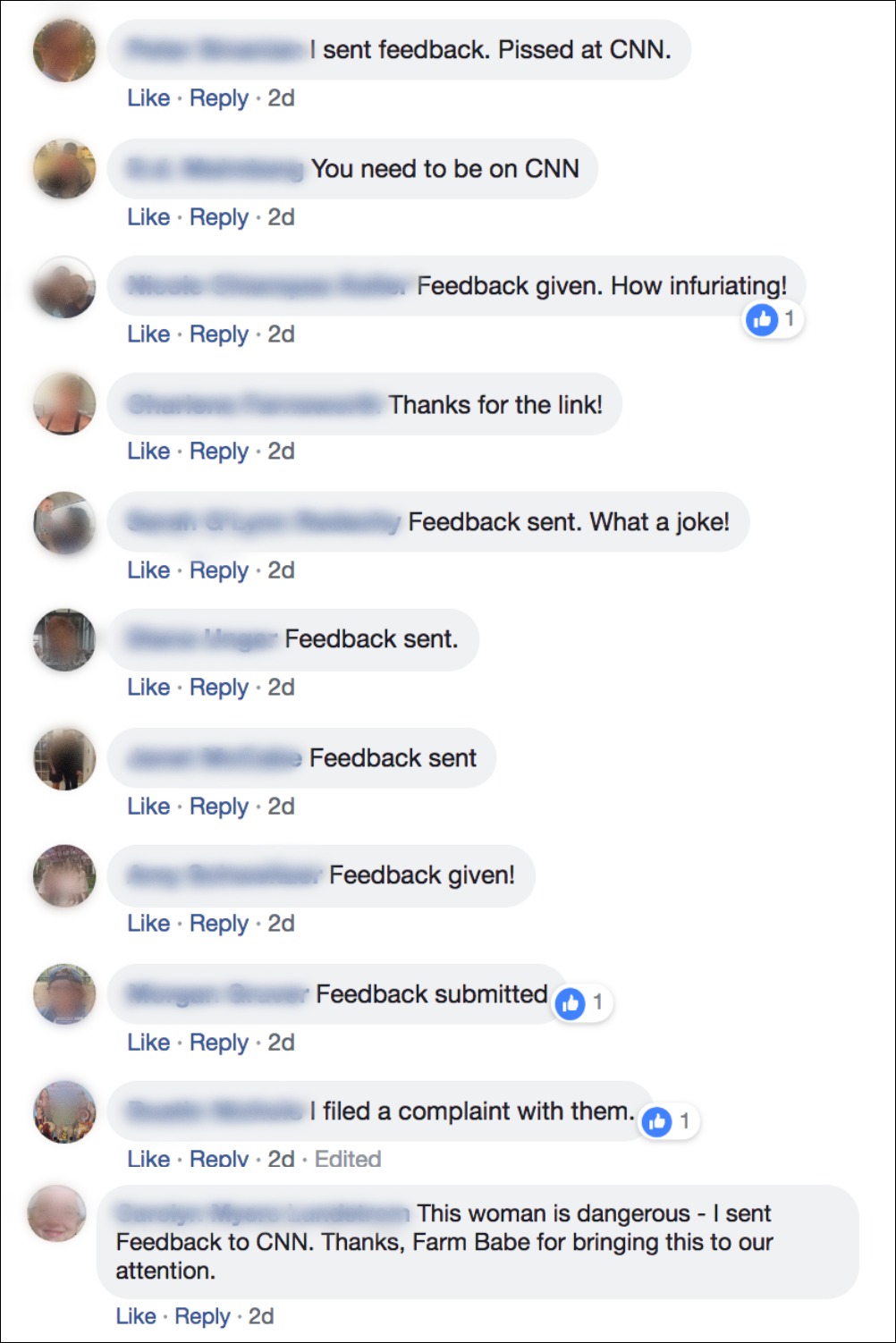 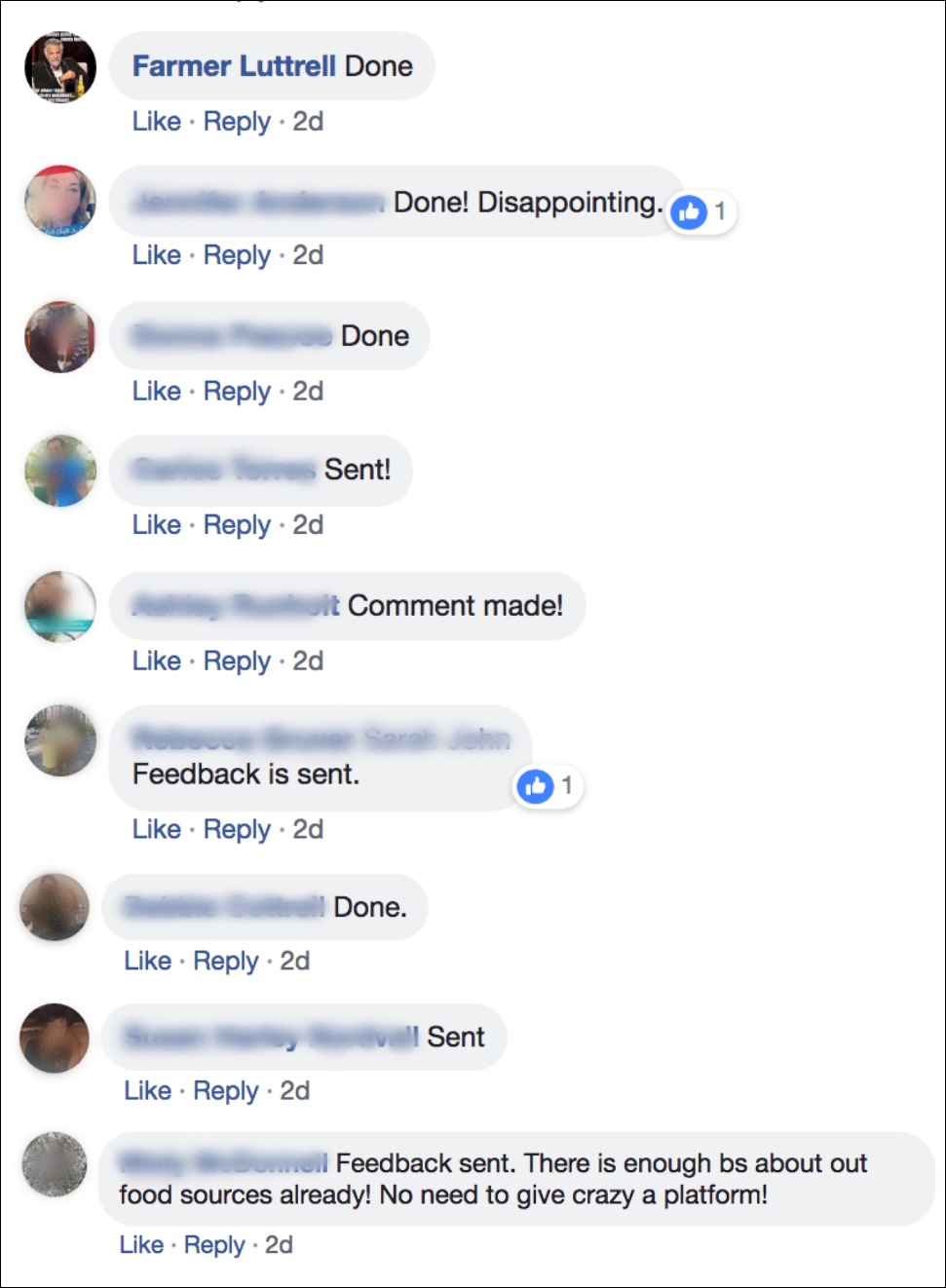 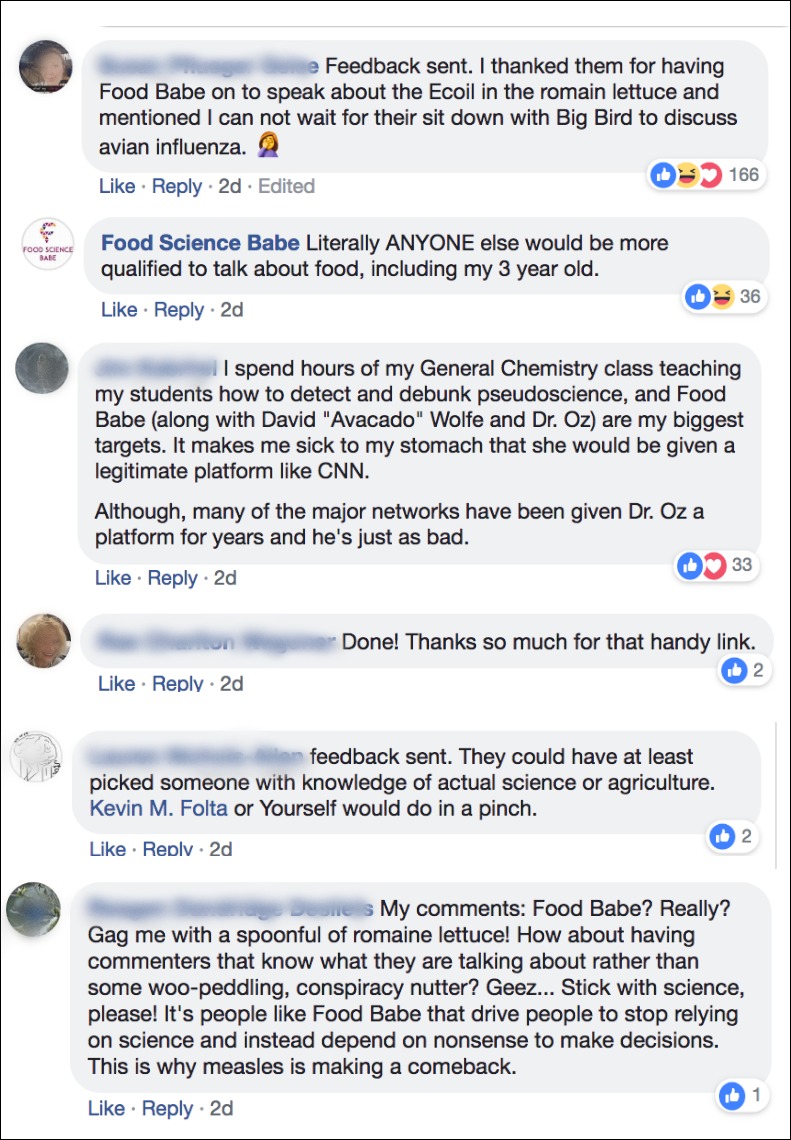 As you can see – there were swarms of people contacting CNN about my appearance.

After Farm Babe launched this astroturf attack, a science writer at The Daily Beast caught on…

I don’t know exactly how she got wind of it – but if I was a betting woman (and in this case, I would love to take a bet if I someone is daring enough to come forward to tell the truth about what happened here) – I would bet she was tipped off by Farm Babe herself or other industry-aligned people with an agenda.

In fact she completely disregarded what I said and made up a narrative that suited the FDA’s response.

On CNN, I said I choose whole heads of lettuce (over bagged cut lettuce) because there are fewer points of potential contamination. I also made it clear that this wouldn’t always eliminate the risk and that you cannot wash E. coli off of contaminated lettuce.

I said I like to minimize the touch points in the supply chain when I make food choices. The less processing a product goes through, the better. And this isn’t wrong – especially when it comes to lettuce.

Lettuce is known to be particularly tricky when it comes to food safety as everything ranging from “production practices, harvesting, packing, processing and food handling have all been linked to illnesses associated with leafy greens. E. coli can get into food through manure, contaminated water used during growing or harvesting, or improper food handling at a store, restaurant or home”. Buying a whole head of lettuce does minimize these touch points.

She went on to state that some scientists have said my “hatred of additives” is rooted in “anti-science” and “perpetuates myths”. To back up this statement, she quotes Kevin Folta criticizing our successful campaign to remove azodicarbonamide from Subway’s bread. It is irresponsible that she uses this argument for two reasons. One – scientists do back up the fact that azodicarbonamide breaks down into carcinogens when baked. Secondly – Kevin Folta was the scientist quoted who is a known shill for the chemical industry.

Also, I am correct in stating that the overuse of antibiotics is creating superbugs that can’t be treated with antibiotics. According to the World Health Organization, “The high volume of antibiotics in food-producing animals contributes to the development of antimicrobial-resistant bacteria, particularly in settings of intensive animal production… Many of the bacteria (such as Salmonella, Campylobacter and Escherichia coli) carried by animals can also cause disease in people. These bacteria, which are frequently antimicrobial-resistant, can contaminate our food supply from farm to fork, such as through slaughtering and processing. Fruits and vegetables may also be contaminated by such bacteria at the farm or later through cross-contamination.”

As you can see, they try to mince my words on purpose to try to destroy my credibility.

What a journalistic fail on this writers fault. She does a real disservice to public safety by spending her time attacking me.

They want me to be scared and go away…

They want to control the narrative – so that everything you see on TV, in the news, on billboards, and on food packages is pro-processed food, pro-chemical, pro-Big Ag, and pro-Big Food.

I refuse to let them silence me. I will not back down from telling people who will listen what I know. And plenty of people are listening. And this is WHY I wrote my new book Feeding You Lies.

I know these types of attacks will be ramping up as this book is hitting stores in a few short months. In the book, I go into greater detail on the many different ways the industry pulls stunts to fool the public (and the media). It’s eye-opening and you need to know what’s going on!

Please pre-order a copy of Feeding You Lies to show the food industry that you support the work I am doing. Pick up a couple extras for your loved ones, it makes a great gift!

I need every single one of you by my side.

The best way to make astroturfing less effective is to tell everyone about it! Please share this post.

P.S. Here’s some additional information on Farm Babe’s claims for any science journalists that want to really fact check: 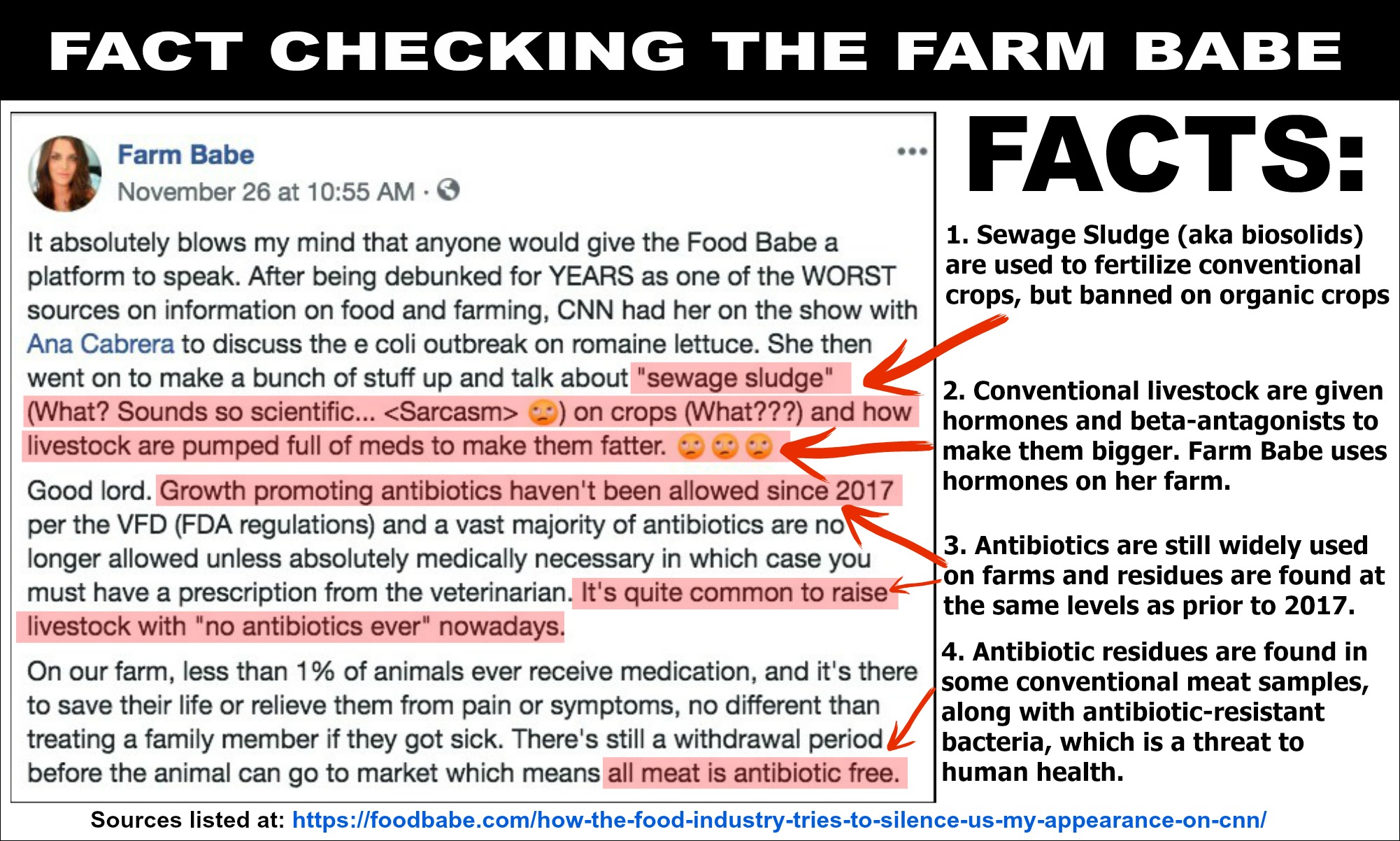 Agricultural use of sewage sludge

Antibiotic resistance of E. coli in sewage and sludge

2. Big Beef keeps getting bigger, thanks to growth drugs with unclear safety records

Farm Babe: What you need to know about growth hormones in meat

Antibiotics in Meat Could Be Damaging Our Guts

Another concern: Drug residues in meat 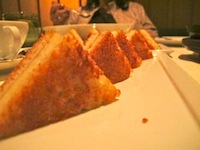 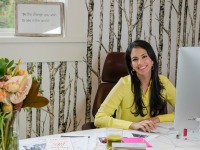 I am going to be attacked for writing my next book: Feeding You Lies 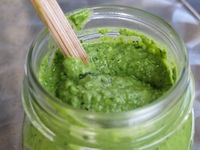