As you may know, I have been working with several consumer interest, public health, and environmental organizations for the last year, and also launched a nationwide petition, asking that Subway enact an antibiotic-use policy that prohibits the routine use of antibiotics in their meat. Over 36,000 of you have signed that petition, and I’m grateful that you recognize the importance of this issue (if you haven’t signed yet, please do so here, this is “one of the most pressing health threats facing the world today”).

Of course, if Subway’s suppliers stop routinely using antibiotics they would make a huge impact, but that is just the tip of the iceberg. This is a MUCH bigger problem because it is rampant across the entire restaurant industry. 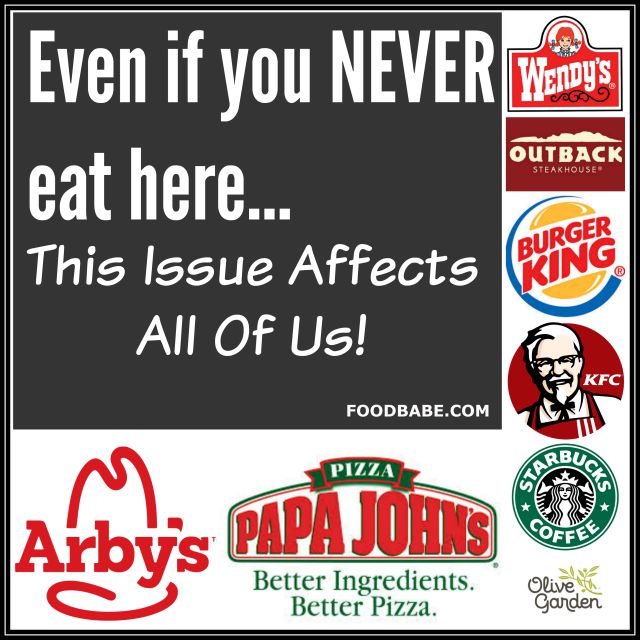 There’s a critical new report on the antibiotics in our meat supply and I hope you join me in spreading the word.

Download and read the full report here: Chain Reaction: How Top Restaurants Rate On Reducing Use Of Antibiotics In Their Meat Supply, written by the experts at Friends of the Earth, the Natural Resources Defense Council, the Consumers Union, the Food Animal Concerns Trust, Keep Antibiotics Working and the Center for Food Safety.

This “Chain Reaction” report and scorecard is the result of a survey of the 25 top restaurant chains in the U.S.

Each restaurant was graded on their antibiotic-use policies and practices – and the results are horrifying. Almost all of the restaurants, got a failing “F” grade for not implementing a policy. Many of them didn’t even bother responding to the survey.

A total of 20 restaurants scored an “F” (complete list at the end of this post), and I’m not just talking about cheap restaurants like Taco Bell and Little Caesars. Even restaurants that many Americans think of as “higher quality” like Outback Steakhouse and Olive Garden got a big fat “F”. Millions of people are eating at these restaurants every single day and probably have no idea that their dollars are contributing to the superbugs epidemic.

I know that many of you don’t eat at these restaurants – or may not eat any meat at all – so I don’t want to go on without mentioning why this issue concerns every single one of us. 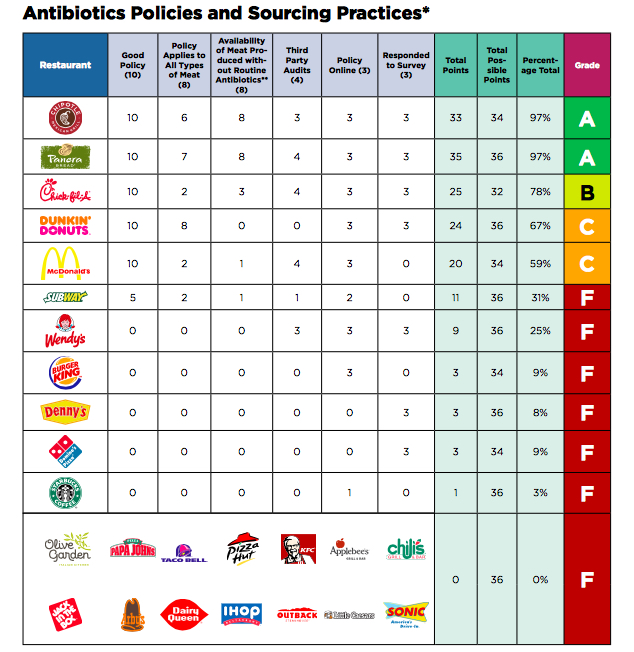 Even if you’re vegan or wouldn’t touch these restaurants with a ten foot pole, antibiotic-resistant bacteria can directly affect you. Here’s why:

Conventional animals are raised in large factory farms where they’re routinely fed low-levels of antibiotics (to prevent diseases in poor living conditions and to make them grow bigger) but the antibiotics are leaving behind stronger bacteria (superbugs). These superbugs are not just in their meat, but contaminate water, soil, and produce. A recent study even found that these superbugs are blowing in the wind! All of us can be infected (vegans and meat-eaters alike). The misuse of antibiotics and irresponsible practices in raising conventional farm animals is contaminating the environment that we all live in with superbugs that are resistant to modern-day antibiotic medical treatment (my own dad was affected by this issue).

You may have heard that Subway has plans to ditch antibiotics, but they still got a FAILING grade.

Although Subway mentioned to the media that they have a goal to eliminate antibiotics, they have not clarified whether this would include all antibiotics in their entire supply chain and when it would be implemented. They haven’t made a real commitment by establishing a public policy with a timeline. Subway didn’t respond to the survey or to multiple requests to clarify their position, and have essentially closed the door on having an open conversation about this issue. They are joining the 19 other restaurants that got a big fat “F” for failing to have a clear policy on antibiotic usage.

What about the meat at the 5 restaurants that “passed” the survey?

I should make it clear that I still don’t recommend eating the meat from the few restaurants that passed the survey and that’s because they don’t serve organic meat. Meat that is sold organically can not be from animals that were fed GMOs or given antibiotics and other growth promoting drugs like these:

McDonald’s, Chick-Fil-A, and Dunkin Donuts ended up with passing grades, yet they still could be using growth hormones and Ractopamine to raise their meat.

As the report highlights, there are concerns that they will increase the use of these drugs to replace the antibiotics that they were using to bulk up their animals. Also, McDonald’s is still allowing for the routine use of antibiotics for “disease prevention” in their beef and pork (which doesn’t prevent antibiotic misuse).

Chipotle has a better policy that prohibits antibiotics, hormones, and growth promoting drugs in all of their meat, however much of it is likely still GMO-fed (which they freely admit), and according to the report (pg. 12) only 25% to 50% of their beef is grass-fed. However – I am thrilled that they have gone non-GMO with the rest of their food, and am cheering them on for spearheading the way in this direction.

Along with Chipotle, Panera Bread was the only other restaurant to get an “A” grade because the majority of their meat isn’t produced with antibiotics and 80% of their beef is grass-fed. Panera also prohibits growth hormones and beta-agonist drugs (like ractopamine) in their meat production, however they don’t serve any organic meat.

An increasing number of Americans want meat that is raised without antibiotics and are willing to pay more for organic.

The sales of meat not raised on antibiotics rose 25% from 2009 to 2012, and organic meat sales are the fastest growing segment of the organic food industry. So, what is holding some of these chains back from changing?

Here’s what we can do to nudge them in the right direction:

If all of the major restaurant chains in America stopped misusing antibiotics and improved animal welfare, their enormous purchasing power would shift the entire industry and that is why we are focusing on the largest chains like McDonald’s, Wendy’s, Burger King, KFC, and Subway. The most effective act that we can take is to raise our voices and vote with our dollars.

Join me in contacting these restaurants that received a failing grade by visiting their Facebook page or calling their customer service. Ask that they eliminate routine antibiotics use from their supply chain and to offer grass-fed and organic options.

What else we can do:

Last, but not least!

Share this post with your friends and family, even if they never eat at these restaurants! It is going to take all of us to change this, but I know that with our collective activism we can make it happen! 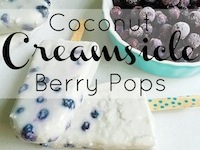 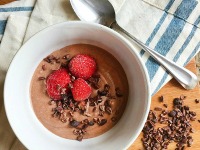 17 responses to “This Is Disturbing, Whether You Eat Fast Food Or Not.”