I’ve always loved cereal and as a child I downed bowls of Golden Grahams for breakfast and sometimes dinner too. When I grew up, I ate Fiber One on top of my yogurt while sitting in my cubicle at work. I thought it was very healthy for my body (because of all that fiber and would help me lose weight), and just didn’t understand why I didn’t look and feel my best after eating it. Thankfully I found much healthier cereal later in life but before I tell you about my favorite kinds, we must discuss what is really going on in the “healthy cereal” industry.

It’s estimated 94% of us have cereal in the cabinet – but a century ago hardly anyone did. Cereal was the first processed food, making life easier for Americans (and now for people all over the world). Cereal requires no cooking, no skills, and it’s just about as easy as you can get. We want everything to be quick and easy, and this has become an epidemic in this country. This is why cereal has been called the biggest success story of the modern food industry, and as put by author Michael Pollan, “Breakfast cereals in many ways are the archetypal processed food product of modern capitalist food economics”. 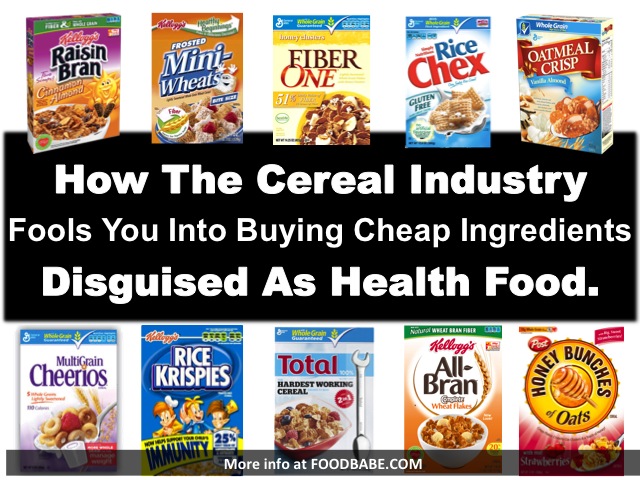 Millions of dollars are spent on advertising cereal every year, and while most of it aggressively targets children, they heavily advertise to adults as well – from Trix “Silly Rabbit” commercials, free prizes, online games (advergames), celebrity endorsements, product placements, and the marketing messages on the box – we are inundated with their marketing messages every day. It’s all done to make us believe that we don’t have time prepare real food for our families and that their vitamin-fortified creations will give us (and our kids) the energy we need to get through a hard day.

But, when you take a hard look at cereal, what is it really?

In reality, the cereal industry is making billions selling us cheap commodities like corn and sugar, mixed with cheap additives like artificial colors, dumped into a colorful box with cartoon characters. Mainstream cereals are so heavily processed that they do not have natural nutrients, that’s why most of them are sprayed with vitamins, minerals, and sometimes fortified with protein. It’s the ultimate fake food.

The marketing messages on the cereal boxes sure sound healthy: “High Fiber”, “Protein”, “Gluten-Free”, “Low Fat”, “All Natural”, “Essential Vitamins” and “Good Source Of (insert vitamin here)”. But, is cereal really good for us or is it just processed junk food? Several “healthy” cereals contain questionable additives that should never be in a healthy breakfast.

Some of the WORST ingredients you’ll find even in “Healthy” cereal:

Kellogg’s: “Since the majority of our ingredients come from U.S. farms and GM crops have been grown in the U.S. for the past 20 years, our foods likely include ingredients derived from GM crops in the same proportion that they occur in the U.S. food supply.” – via email, February 2015. NOTE: Kellogg’s has spent over $1.8 million to fight GMO labeling initiatives in the U.S.

General Mills: “Because U.S. farmers use GM seed to grow certain crops, 70 percent of foods on U.S. grocery store shelves likely contain GMO ingredients. As a result, if an American food or beverage product lists corn, soy, canola, cottonseed or beet sugar as an ingredient – and if it’s not organic – it likely contains GMOs.” – via their website, February 2015. NOTE: General Mills has spent over $3.6 million to fight GMO labeling initiatives in the U.S.

Quaker: “We do not require or exclude the use of these ingredients, so we don’t require our suppliers to provide this information. As a result, we cannot give you a definitive yes or no answer. That said, we’re glad for the chance to provide some clarification about genetically modified ingredients. When it comes to safety, the FDA has determined that foods developed through this process are no different than foods developed by traditional plant breeding. And in fact they conclude that these Genetically Modified foods don’t differ from other foods in any meaningful way. Finally, all of our products (worldwide) comply with all applicable food laws and labeling requirements. Quaker relies on and supports the regulatory agencies charged with safeguarding our food supply when sourcing ingredients for our products.” – via email, February 2015. NOTE: Quaker’s parent company, Pepsico, has spent over $8.8 million to fight GMO labeling initiatives in the U.S.

You’ll also want to watch out for “non-GMO” cereals like those made by Kashi that contain several ingredients that were likely extracted with the neurotoxin hexane (and may contain residues), such as soy protein isolate and defatted soy grits. Kashi also uses canola oil which is processed to death and not the most nutritious form of fat. 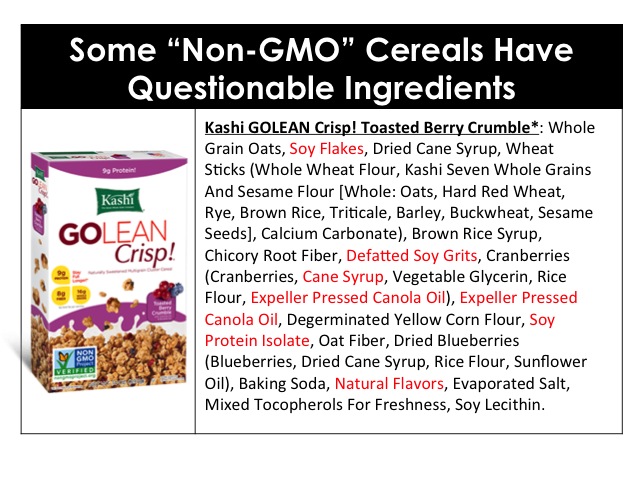 One cereal that really gets me fired up is Froot Loops.

Did you know Froot Loops is now considered one of Kellogg’s Top 5 cereals? Millions of Americans feed this to their kids. The problem with Froot Loops is they are the perfect example of the alarming double-standard in the quality of food that we get here in the U.S. versus other countries. The ingredients in the U.S. include partially hydrogenated vegetable oil, BHT and several artificial colors: Blue no. 1, Red no. 40, Blue no. 2, Yellow no. 6. In Europe, Kellogg’s doesn’t want to slap a warning label on Froot Loops, so they reformulated it with natural colors derived from spinach, carrots, blackcurrent, and paprika to sell in the European market. They also removed partially hydrogenated oils (linked to up to 7,000 deaths per year) and BHT for our friends overseas. If that’s not reason enough to never buy Froot Loops again, GMO Free USA recently tested it and found 100% of the corn in Froot Loops is GMO and contained “significant levels” of the toxic pesticide glyphosate. 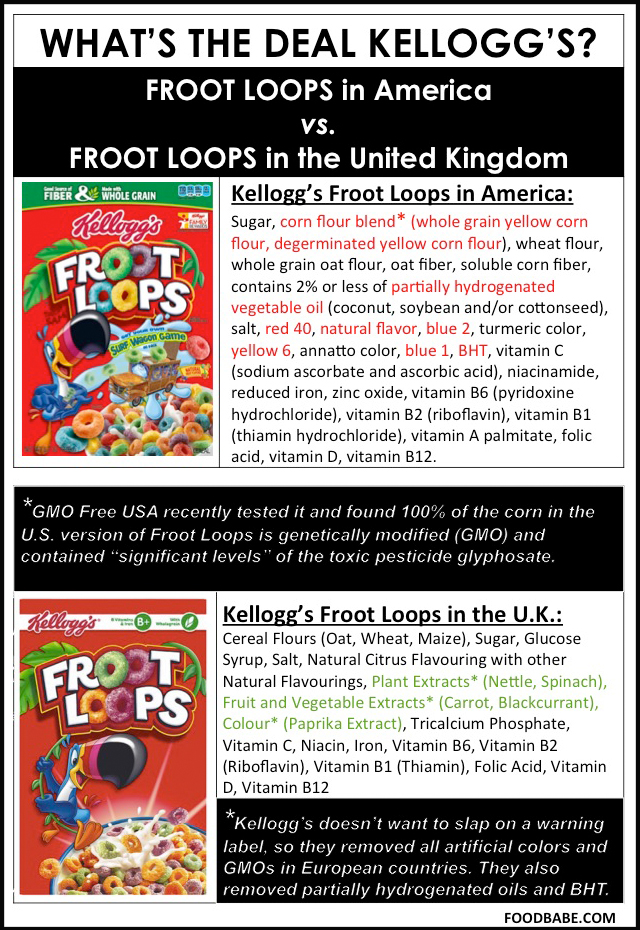 If you love cereal, here’s how to pick the most nutritious ones:

Keep in mind that just because a cereal is labeled non-GMO or organic, it may not be made with nutritious ingredients – you still want to read those ingredient lists! Look for those that don’t contain any of those unhealthy ingredients mentioned in this post, and choose cereals that are minimally processed and made with real food: seeds, nuts, and dried fruit. Also don’t fall for the “Natural” label as those can still contain GMOs, loads of additives and synthetic pesticide residues.

2 Moms In The Raw Cereal – This grain-free cereal is full of healthy fruit and nuts like almonds, walnuts, bananas, coconut, and dates.

Ezekiel 4:9 Sprouted Grain Cereal – The grains in this cereal are whole and sprouted, so they are easier for your body to digest and won’t spike your blood sugar like flour-based cereal grains do. My favorite is their cinnamon raisin flavor.

One Degree Sprouted Brown Rice Crisps or Erewhon Crispy Brown Rice Cereal:  Either of these make an excellent replacement for Kellogg’s Rice Krispies, and are BHT-free.

Chiarezza Cereal, Almighty Mango Goji Cereal – Made from organic chia, hemp seeds, mango, buckwheat, banana flakes, and goji berries. As there are chia seeds in this one, you can also make a yummy pudding by pouring nut milk over it and letting it sit in the fridge for about 25 minutes.

Homemade Granola – It’s easy to stay far away from store-bought granola filled with refined sugar, inflammatory oils, and flavors, because granola is so easy to make at home. My recipe is made with oats, raw pistachios, goji berries and coconut, but it’s very flexible and you can easily substitute your favorite ingredients.

Parfait Porridge – I regularly make this recipe and like to make several at once to keep in the fridge for a few days. My porridge is made with raw oat groats (which contain more vitamins, minerals and nutrients than processed steel cut, rolled or instant oats), fresh or frozen fruit, chia seeds and nut milk. It’s incredibly refreshing and healthy – it’s cereal on the go!

If you know someone in your household still eating unhealthy cereal everyday, please share this post with them! Once they know this information, they can’t go back.

P.S. In my #1 best selling book The Food Babe Way – I teach you even more ways you can break free from the hidden toxins in your food, lose weight, look years younger and get healthy in just 21 days. In my 2nd book, Feeding You Lies, I blow the lid off of the lies we’ve been fed about the food we eat – lies about its nutrient value, effects on our health, label information, and even the very science we base our food choices on. And, my first cookbook, Food Babe Kitchen, contains over 100 mouthwatering recipes to show you how delicious and simple it is to eat healthy, easy, real food. Available anywhere books are sold. 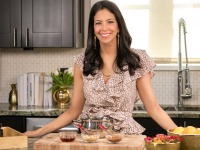 Is Your Probiotic Pill Worthless? A Simple Test To Find Out At Home!

How To Juice Without A Juicer (It’s So Easy!)

176 responses to “Beware Of This Head Fake: Healthy Cereal That Isn’t.”