Think back to the last time you were grocery shopping for meat. What labels did you look for? Are those 100% natural, hormone-free, antibiotic-free, and nitrate-free meats really the best choice or are you being SCAMMED?

Unfortunately a lot of people are getting totally scammed…

Food companies are legally allowed to put misleading labels on their products to fool customers. To see how screwed up regulations are when it comes to meat labels, look no further than a recent lawsuit against Hormel. They got sued by the Animal Legal Defense Fund who alleged the advertising for Hormel’s Natural Choice Deli Meats was misleading consumers (1). They argued that Hormel advertises this deli meat as “100% Natural” but raises the meat in factory farms with risky drugs and antibiotics. That is FAR from natural, right? Hormel shouldn’t be allowed to advertise this meat as “natural”, right?

Actually they can. Last week, the court dropped the lawsuit (Hormel won!) because they found that the claims they are making about their deli meat, such as “100% Natural” are legally approved by the USDA (in other words, our government allows it) – so Hormel is free to use these terms in both their advertising and packaging even though this meat is raised on antibiotics and growth-promoting drugs in a factory farm (2).

The “100% Natural” label means basically nothing. It’s completely legal for food companies to lie to consumers. And that is not the worst part…

A big surprise in court filings revealed that the pork used to make Hormel’s Natural Choice Ham Deli Meat is the same pork they use to make SPAM (3). This pork is raised in inhumane large-scale factory farms where the pigs dine on GMO grains laced with growth-promoting drugs to bulk them up on less food (which bulks up Hormel’s profits too). 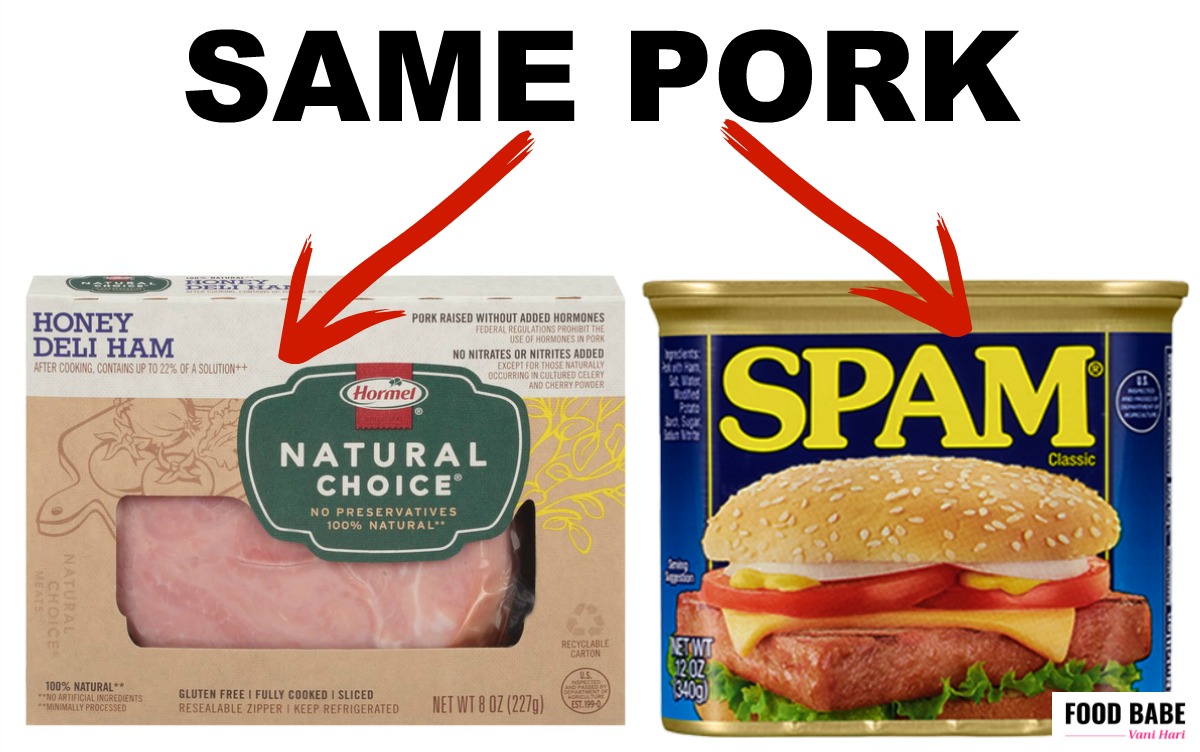 Insane, right? How could this be?

It’s shocking because of the way Hormel advertises this deli meat. They even call it the “NATURAL CHOICE” right there in the name! Products like this disgust me because they are preying on consumers who are trying to feed their families healthy food but don’t know that food companies are allowed to use labels that are not really truthful.

To see how Hormel has been able to scam so many people into believing their Natural Choice deli meat is a healthy choice, let’s look closely at the labels on this package… 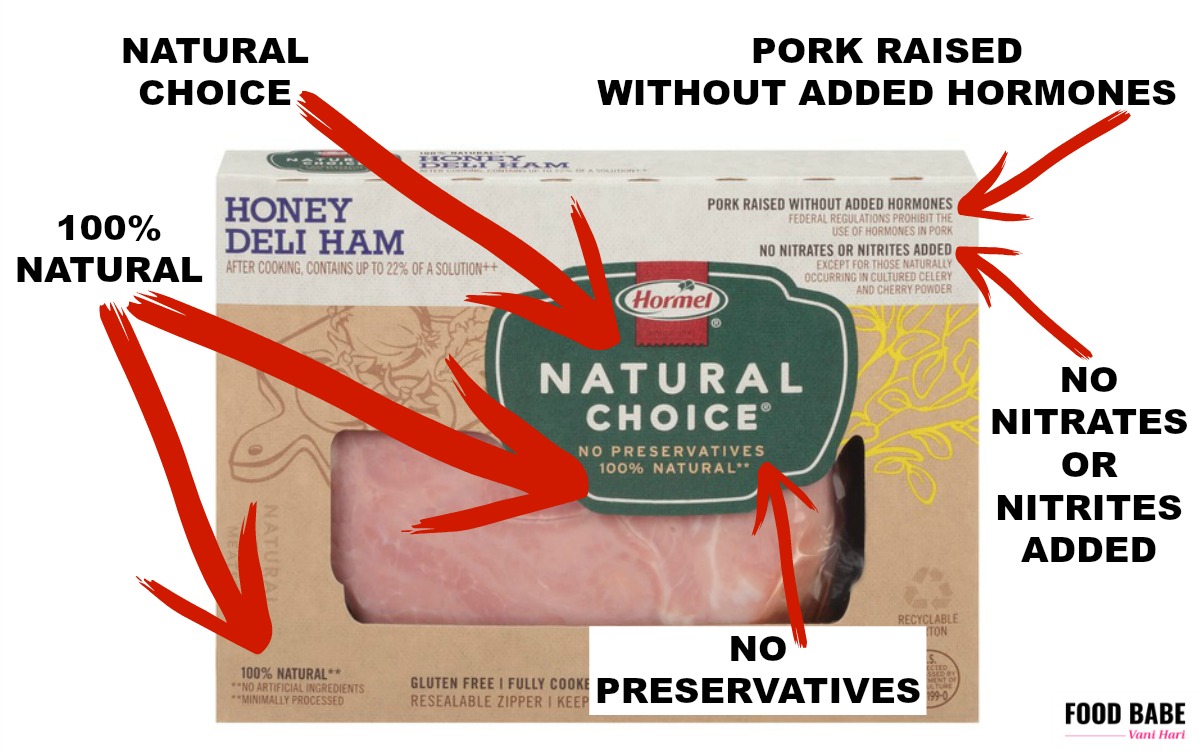 “100% Natural”: Companies can call their meat “Natural” if it has no artificial ingredients and is minimally processed. Natural meat is often raised in the same horrible factory farm conditions that conventional meat is – with antibiotics, hormones, ractopamine, GMO feed, etc. This is why it’s perfectly legal for Hormel to call their meat natural – but that doesn’t mean it’s ethical for them to do so! Remember this applies to fresh meat too (not just deli meats).

“Pork Raised Without Added Hormones”: This label infuriates me. Why? Because pork farmers are not allowed to use hormones – it is prohibited (4). This means that all pork and ham are raised without added hormones (the same goes for chicken & turkey). So, why does Hormel add this label to their pork and turkey? It is 100% pure marketing B.S. They know that the average customer sees this as a sign that their meat is somehow raised better, but it literally means NOTHING. They do use hormones to raise their beef as regulations allow this, and this is why you won’t find this label on Hormel’s Natural Choice Deli Roast Beef.

The lawsuit revealed that some of Hormel’s pigs are raised with the growth-promoting drug ractopamine (5). This drug is BANNED in Europe, Russia, and China and causes pigs to suffer from “hyperactivity, trembling, broken limbs, inability to walk and death” (6). Using ractopamine is just as bad, if not worse, than growth hormones… so don’t be fooled!

“No Nitrates or Nitrites Added”: This is misleading because technically nitrates are added. You see, Hormel doesn’t add synthetic sodium nitrate or nitrite like you’ll find in most deli meats – which is good because these additives are linked to cancer and heart disease (7). Instead they use cultured celery powder and cherry powder, which are both naturally high in nitrates (8). There is controversy surrounding whether naturally-derived nitrates are any safer for you when added processed meat, because they may still create cancerous nitrosamines (9). Some “natural” processed meat products with celery powder have been shown to contain very high levels of nitrates – even more than conventional varieties (10).

“No Preservatives”: Hormel does use cultured celery powder and cherry powder to preserve the meat, so I wouldn’t consider this preservative-free.

Yes, these organic deli meats may cost more than conventional deli meats raised in factory farms. But rather than judge the value of food in terms of dollars, think of its value in terms of nutrition – and your health. The only way factory farm practices will change is when enough people refuse to buy meat that was raised this way.

If you know anyone who might be buying Hormel’s Natural Choice deli meats and blindly believing the lies on the package – please share this post with them.

P.S. This just scratches the surface of the type of info you’ll learn in my new book Feeding You Lies. I’ll show you what food products have lies on the package, who is doing the lying, why they are lying, and how you can protect yourself. It’s available in bookstores everywhere! 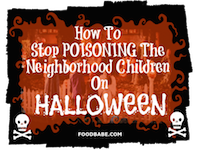 How To Stop Poisoning The Neighborhood Children On Halloween. 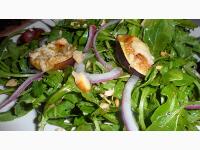 42 responses to “Scam alert…You could be eating SPAM meat”