On Monday evening, I received a message from Chick-fil-A executives. I have been in contact with them for over a year and a half, consulting with them on the top priorities of consumers and on healthy ingredient changes. They said they had some big news coming the next day and that I would be very interested.

Not only was I interested, but when the news hit, I screamed so loud that every neighbor within a mile radius must have heard me. And then tears of joy started rolling down my face. This week has been intense, and to say I am running on fumes is an understatement. Between all of the press, TV, print and radio interviews regarding the Subway announcement, I have had little to no rest.

This news was even bigger than I ever imagined. Chick-fil-A publicly committed to become antibiotic-free within 5 years. A bold move for a major fast food company that serves only chicken and that told me this was nearly impossible when I met with them at their headquarters in 2012.

During my meeting with them back in October 2012, we discussed a laundry list of concerns I had with their menu items – everything from MSG in their famous sandwich, to artificial food dyes, to TBHQ, and GMOs. During our discussion in their boardroom, they asked me to prioritize the list of requests. I told them eliminating artificial food dyes would be a quick change to implement, but my number one request on the list was to provide safer and more sustainable chicken that is raised without antibiotics and GMO feed.

Even though they are not going fully organic or non-GMO, this commitment is significant. This will help to reduce the common practice of using antibiotics to quickly fatten chickens and keep them “healthy” in unsafe conditions. This is important because the more we use antibiotics in our environment, the less impact they will have on us when it comes to treating certain superbugs. The widespread use of antibiotics in animal feed is responsible for creating new strains of antibiotic-resistant bacteria, that could, frankly, wipe out the human race if we don’t start doing something about it now.

Chick-fil-A has indicated they will be working with their current suppliers to make the transition, rather than source antibiotic-free meat that might already be available. This strategy gives me some heart ache. I’d like to see them move faster than 5 years and hope they will be able to influence their suppliers (think Tyson, Perdue, etc.) to move faster or at least consider using other suppliers who are not using antibiotics in the meantime. Regardless, their decision to make this switch will have an enormous impact on the fast food industry and put pressure on other major chains to finally do the right thing. (Note – “Eat Fresh” Subway does not provide antibiotic free meat!) 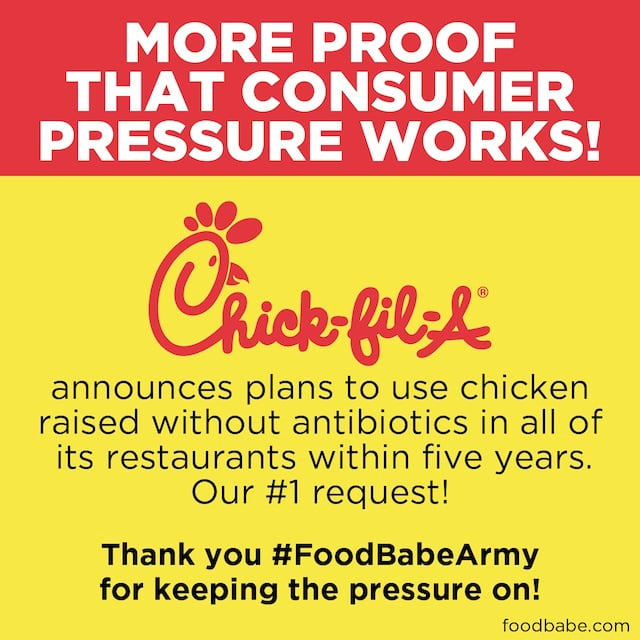 This Does Not Mean Everyone Should Go Eat There

Let me be super clear on this. This announcement or any of the changes Chick-fil-A has already started making, does not mean this food is now healthy or I will begin to eat there.

Next on my list of demands is the removal of Monosodium Glutamate (and various hidden MSG additives, like autolyzed yeast extract) from their chicken sandwiches. I think it would be absolutely amazing to be able to eat at a fast food restaurant with a drive through window again! But you won’t catch me at Chick-fil-A until they start providing clean, organic and sustainable food! Chick-fil-A would be surprised about how many people would choose an organic option if they offered it. We know you can do it Chick-fil-A!!! (And if you do, I promise to rent a chicken costume and run up and down the street on live TV).

After Chick-fil-A announced late last fall that they would be removing TBHQ, high fructose corn syrup, artificial food dyes, and switching to a cleaner bun (without yoga mat chemical azodicarbonamide, mind you), the media contacted me for my response. In every interview I made it clear that they still had not met my top requests to go antibiotic free and these major media outlets below helped keep up the constant pressure on Chick-fil-A to do the right thing. I want to thank them for covering that story and letting our voices be heard across the nation, which I believe influenced Chick-fil-A to finally make the shift.

Also, here are some past links to the blog posts that made this possible – the ones you shared over and over again, that spread the truth about Chick-fil-A:

Thank you to all the media outlets that are covering this breaking news story – See the latest below:

And most importantly, thank you Food Babe Army. You did it again.

The Tipping Point Is Here. 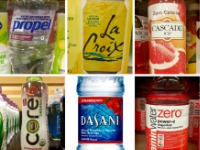 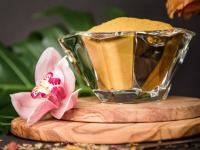 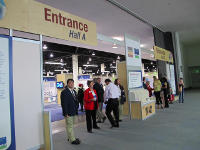 228 responses to “We Did It Again! Chick-fil-A To Go Antibiotic Free”