If you’ve been a long time Food Babe Army member you know, I’ve been investigating Starbucks for a long time and am so happy to report another major victory! After years of hiding the list of ingredients in their drinks from the public, they have now published their drink ingredients online. There are still a few outliers that for some reason do not have ingredients listed, but now we can all see what is exactly in their most popular coffee drinks, smoothies, frappuccinos and lattes.

This is the type of transparency that all restaurants should abide by, and it is ridiculous that some of them are still trying to hide their ingredients (I’m talking about you, In-N-Out Burger!) – it took years of activism to get this done and without your help to spread the word, this would have never happened. 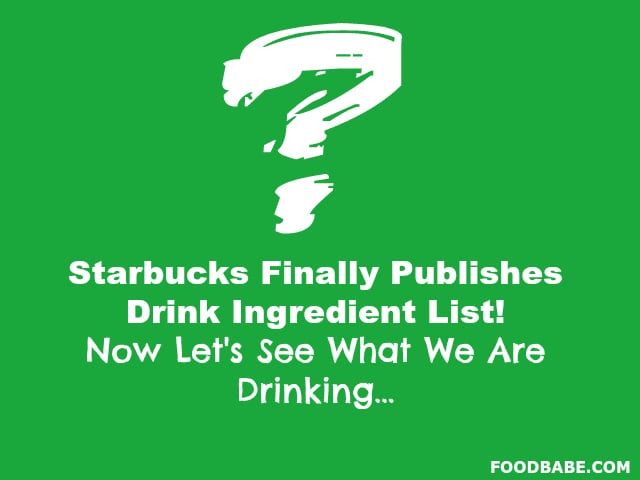 Now that we know what’s in their drinks, let’s take a closer look…

Starbucks has made some improvements to their drinks in the last couple years by removing certain additives we have campaigned against – but they still have a long, long way to go before I’d consider ordering coffee drinks from them. Here’s why…

Even without seeing the ingredients, it’s pretty obvious that milk is the main ingredient in most of their coffee drinks – so let’s discuss this first.

Be aware that they serve conventional (non-organic) milk at Starbucks, which comes from farms where the cows are almost always fed a diet that consists primarily of GMO feed (soy, corn, cottonseed) that is laden with pesticides.

Starbucks  is made with Monsanto Milk!

Did you know that the vast majority of GMO crops are not put into human food, but are instead used to feed farm animals and make biofuels?

This sure makes you question the corporate stance that GMOs are necessary to feed a growing population, huh? Not only is Monsanto profiting off of the sale of GMO seeds, but they are selling them along with their own herbicide “Roundup” with glyphosate. It’s a double-whammy for them!

That’s why I call the milk used at Starbucks (and anywhere else that uses conventional milk) “Monsanto Milk”, and don’t buy products made with it.

If you really want to hurt the bottom line of the biotech companies – like Monsanto – who are profiting heavily off of GMO technology, you need to vote with your dollars and refuse to buy conventional meat & dairy products grown with GMOs. When you do this, companies will start sourcing non-GMO and organic ingredients, creating more demand for organic crops, which will eventually lead to more farmers switching to this type of agriculture. This is better for our environment, even if you don’t drink dairy. That’s the big picture!

So, first things first… Starbucks main priority should be to get off of Monsanto Milk.

The best way to do this is by offering organic milk, as organic milk is prohibited from being raised on GMO feed. If you are going to drink dairy, the best choice is grass-fed organic – and I give 7 reasons why here.

Carrageenan – I’ve written extensively about carrageenan since 2012, when I found out that it’s used in many dairy-substitutes like nut milks. Carrageenan is added as a thickener and to keep ingredients from separating as an emulsifier, but it’s known to cause digestion problems and is contaminated with“degraded carrageenan”. Tests have found as much as 25% degraded carrageenan in “food-grade carrageenan” (the kind used in some coconut milks). As reported in the news recently, a new study published in Nature, found that emulsifiers may be contributing to the “rising incidence of obesity, metabolic syndrome, and inflammatory bowel disease by interfering with microbes in the gastrointestinal tract”. Many mainstream brands are removing (or have removed) carrageenan from their products, like Silk and So Delicious – but it’s still found at Starbucks and in Coconut Dream brand.

Gellan Gum, Locust Bean Gum and Guar Gum– These ingredients are known to cause stomach issues like bloating and gas in people who have sensitive digestive systems. I personally try not to consume these ingredients on a regular basis especially for foods that I have often like coconut milk and other nut milks.

Avoiding these ingredients as much as possible is a priority for me and that is why I make my own 2-ingredient coconut milk and organic coffee at home – even while traveling and on the road (see how I do that here)!

Taking the milk out of the equation – most of the drinks at Starbucks are still filled with a ton of sugar, natural flavors, preservatives, thickeners, emulsifiers and other artificial additives.

Even though they revamped the Pumpkin Spice Latte without caramel color (and with real pumpkin) because of our activism – it’s chock full of GMOs, refined sugar, and additives like carrageenan that I mentioned above that I don’t put in my body.

I went through their website and picked out some examples to show you what I think are some of the worst offenders at Starbucks. When you see these ingredients I want to know… Would you drink them??? 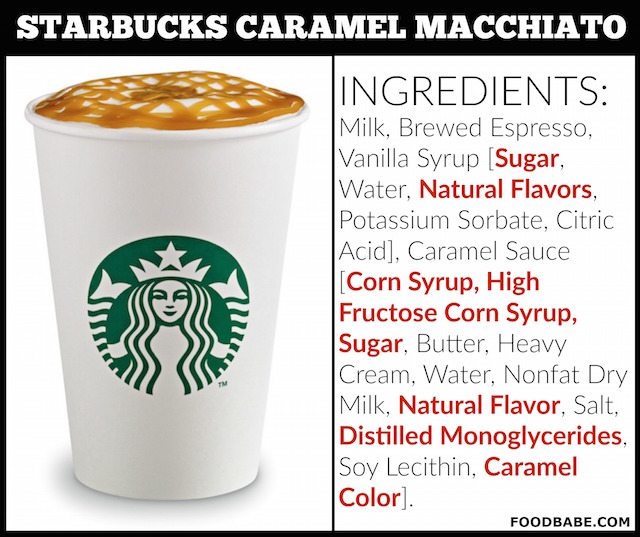 Starbucks still uses high fructose corn syrup in the “caramel sauce” found in their caramel macchiatos. Not only is this sweetener generally made from GMO corn, but it’s been shown to contribute to the development of diabetes. Although they have taken the caramel color that’s linked to cancer out of most of their syrups, you will still find it in this caramel sauce. 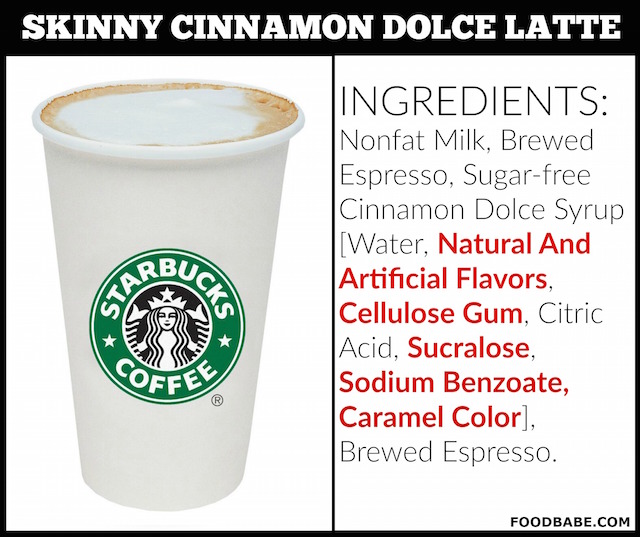 When it comes to their “Skinny” drinks, don’t be fooled by the catchy name. Drinks like the “Skinny Cinnamon Dolce Latte” are sweetened with sucralose (Splenda). Research out of Europe showed rats developed leukemia after consuming sucralose. It’s also been shown that artificial sweeteners are doing little to help people lose weight and are actually linked to weight gain. Instead of using real cinnamon that is packed with antioxidants, the syrup is entirely flavored with “Natural and Artificial Flavors”. These chemicals are engineered by flavor manufacturers to create what David Kessler (former head of the FDA) calls a “food carnival” in your mouth. The inability to stop eating because the flavors they have synthesized trick your mind into wanting more and more. How’s that for a “skinny” drink? 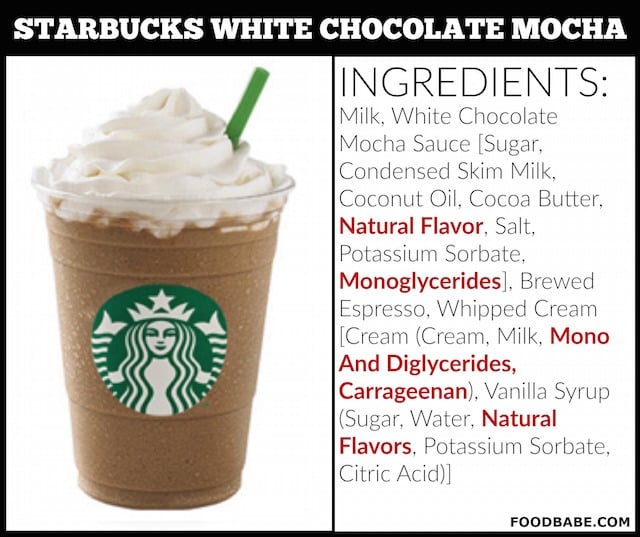 This drink contains monoglycerides, which is a byproduct of oil processing that may contain artificial trans fat. The consumption of artificial trans fat is strongly correlated with an increased risk of type 2 diabetes and heart disease. The CDC has linked it to at least 20,000 heart attacks per year and the Institute of Medicine says trans fats have “no known health benefit” and there is no safe level to eat. The whipped cream that tops their mocha (and some other drinks) is thickened with carrageenan (along with more mono and diglycerides). 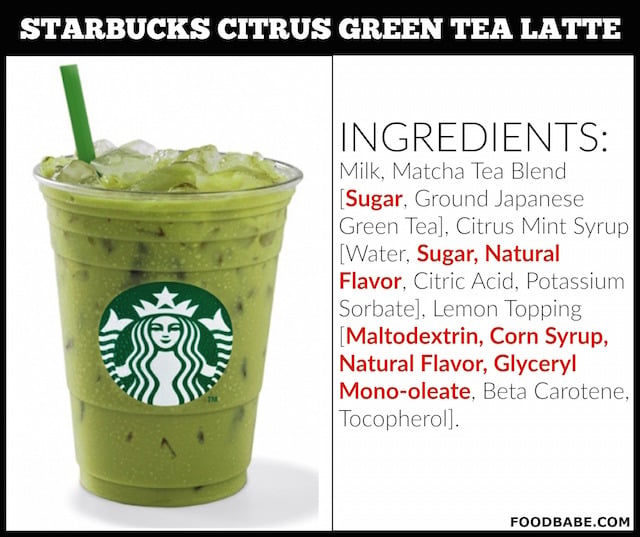 This sounds like a cleaner drink at Starbucks and like it would be somewhat healthy (it’s even green, haha!) but it is anything but healthy! This tea is completely loaded with sugar, sugar, and more sugar – with 50 grams in a Venti – and more than most of the other drinks at Starbucks. Other forms of sugar in this drink come from maltodextrin and corn syrup, which both likely GMO-derived. Instead of using real lemon to give it a citrus flavor, it’s flavored with a chemical concoction of flavors, sweeteners, emulsifiers and preservatives. 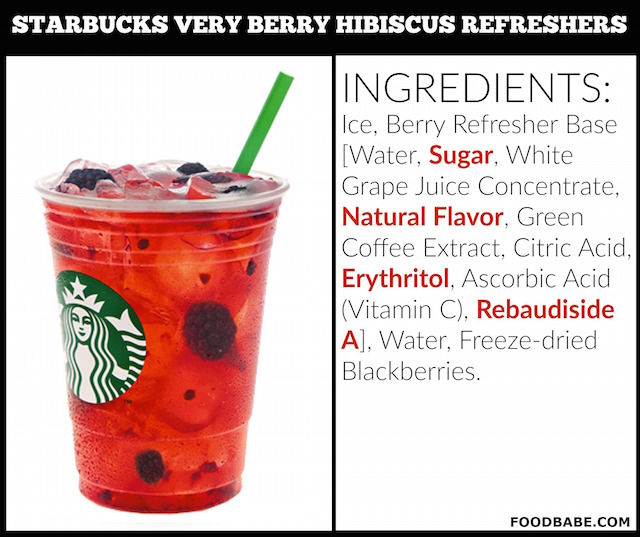 In addition to being sweetened with sugar, Starbucks adds a combination of natural flavors, erythritol, and Rebaudiside A (stevia extract). These are essentially the same ingredients in Truvia, a heavily processed no-calorie sweetener. First, erythritol is a naturally occurring sugar that is sometimes found in fruit, but food manufacturers don’t actually use the natural stuff. Instead they start with genetically engineered corn and then go through a complex fermentation process to come up with chemically pure erythritol. When it comes to the Rebaudiside A, this is NOT the same as whole stevia leaf that you can grow in your backyard! This extract is highly processed using a patentable chemical-laden process…so processed that Truvia goes through about 40 steps to process the extract from the leaf, relying on chemicals like acetone, methanol, ethanol, acetonitrile, and isopropanol. Some of these chemicals are known carcinogens (substances that cause cancer), and none of those ingredients sound like real food, do they? 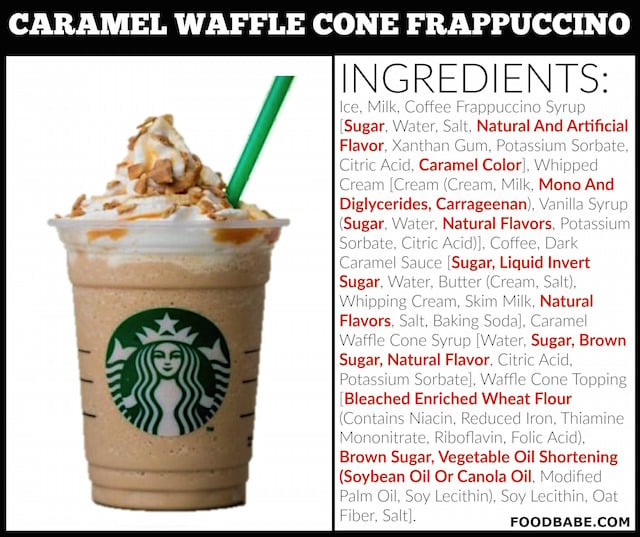 When it comes to frappuccinos it’s really a toss up, because they are all made with similar ingredients and contain an INSANE amount of sugar. Did you know some grande fraps have over 60 grams of sugar in them? That’s like eating 6 regular-size Reese’s Peanut Butter Cups in one sitting. What makes this drink stand out as the worst of the worst is that it contains all the major offenders – artificial flavors, caramel color, mono and diglycerides, carrageenan, preservatives… and then it’s topped with waffle cone made with bleached flour and heart-wrecking partially hydrogenated oils. Most of these ingredients are likely derived from GMOs and are certainly not real food. You can make a delicious tasting frappuccino at home with healthy ingredients – check out my recipe here.

The BIGGEST problem with Starbucks drinks: You are supporting Monsanto with every sip.

Starbucks is serving GMO-raised milk all day long in over 13,000 stores in America. Can you imagine how much milk they go through? Can you imagine the major agricultural shift they would trigger if they switched to organic milk which is prohibited from feeding their livestock GMOs?

Starbucks is investing millions of dollars to get away from their “basic” image and want to be seen as a premium upscale brand that is “values-based”. Does Starbucks value sustainable agriculture? Why don’t they invest their huge bucks into switching to organic grass-fed milk?

Change does not happen overnight, but we have had some huge successes by just focusing on one ingredient at a time. When a leader like Starbucks makes a major change in how they source ingredients, this creates a domino effect that leads to bigger changes down the road. Think about that big picture I was talking about!

We were able to convince Starbucks to ditch the caramel color from the PSL (and almost all of their drinks) – now let’s convince them to stop serving Monsanto Milk!

Contact Starbucks and ask them to stop serving milk from cows raised on GMOs and to start serving organic grass-fed milk instead.

I’m excited to see how Starbucks responds to us and I love you all for taking action with me! Make sure you’re subscribed to my newsletter so you don’t miss any updates!

If you have friends or family who are supporting Monsanto with a Starbucks habit, please share this post with them!

P.S. Remember, there is INTENSE resistance to change. If anyone verbally attacks you for sharing this information online, make sure to read this post! 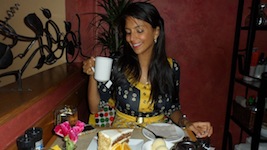 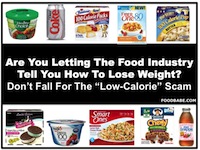 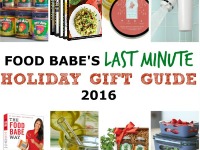 Food Babe Favorite Gifts (To Give or Receive!)

98 responses to “Starbucks Finally Publishes Drink Ingredient List… Here Are The Worst Ones!”