Earlier this month on my Facebook page, I asked you to share your biggest “ah-ha” moment when you started to read ingredient lists. I asked this question because I’m curious about what opened your eyes to the processed chemicals the food industry is dumping in our food.

There were over 1,500 responses on Facebook to my question, and I tried to read every single one of them. I found your comments insightful, really encouraging, and some were really funny! I’m glad to see that so many of you are changing your eating habits and reading ingredient lists! I saw several recurring ah-ha moments (the same ones I had when I started my journey), so I am summarizing the top 10 most popular ones here for you to share with your friends and family, just in case they haven’t had these “ah-ha” moments yet. You might even see your own ah-ha moment quoted below! If you didn’t already know about any of these major offenses at the grocery store, this will also give you tips for what to look out for next time you’re shopping.

Recently I looked at every single jar of pickles in a conventional grocery store, and only found one brand that didn’t contain artificial yellow food dye. Of course, there is no real reason to add dye to pickles, as it’s just used to make them look prettier and gives us no other benefits. Artificial colors are linked to health issues and have been banned or require a warning labels in several other countries – so food manufacturers often take them out of their products in other countries. Most pickles contain Yellow #5 or #6, which have been shown to contribute to childhood behavioral problems.  Better Store-Bought Alternative:  Real Pickles (brand) organic pickles, Woodstock organic pickles. 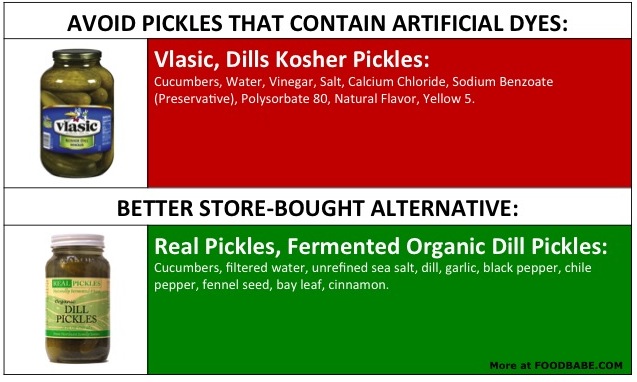 MSG (aka Monosodium Glutamate) is a really common ingredient in packaged soup, along with hidden MSG ingredients like hydrolyzed protein and autolyzed yeast extract. These flavor enhancers trick your brain into eating more than you should and have been linked to headaches, obesity, depression, and mental disorders.  Better Store-Bought Alternative:  Amy’s Organic Lentil Soup or make your own like I do. Here’s a recipe for one of my favorites – carrot ginger soup. 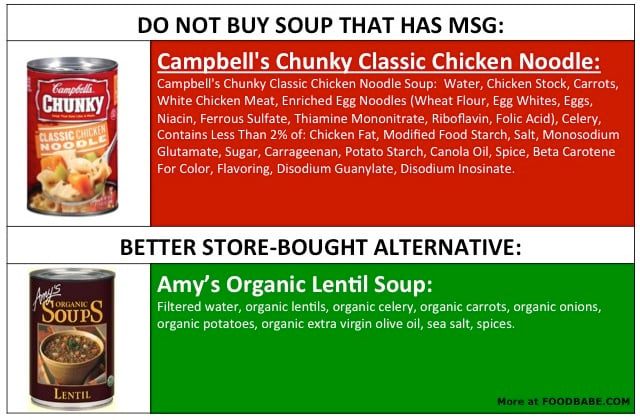 3.  Salad Dressings That Are Full Of GMO Oils!

This is why I make my own salad dressing.  It’s super easy to whip up a vinaigrette at home to avoid dumping GMO soybean oils all over your healthy salad. You might be surprised to know that even salad dressings that say they are made with olive oil (like Wishbone Olive Oil Vinaigrette) typically contain soybean oil as a main ingredient. Almost all store-bought salad dressings also contain emulsifier ingredients to help them stay blended on the shelf, but don’t do anything good for your health. Better Store-Bought Alternatives:  Raw Foodz Salad Dressing (not available everywhere), Hilary’s Eat Well Salad Dressing & Wilderness Family Naturals Salad Dressing. If you are a Food Babe Eating Guide subscriber, you’ll get a new (and easy) salad dressing recipe every month as part of the plan. Check it out here. 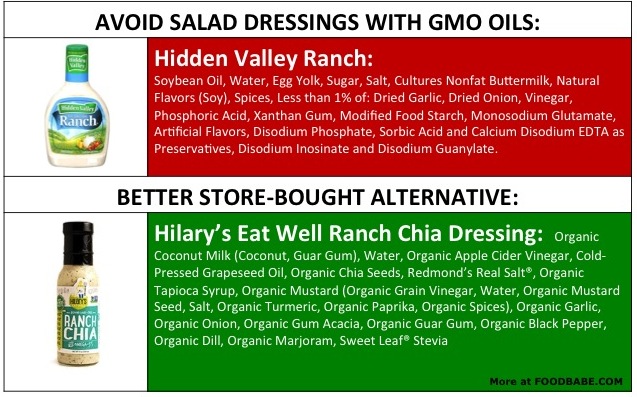 4.  Bread That Has Way Too Many Nasty Ingredients!

It’s nearly impossible to find bread at the store without dough conditioners (like the yoga mat chemical azodicarbonamide), added sugars, artificial colors and GMOs – which is ridiculous because it really only takes 4 ingredients to make bread. Although I don’t eat a lot of bread, when I do I don’t want to be subjected to unnecessary and harmful ingredients.  So, I generally stick to sprouted grain breads or gluten-free varieties that are made up of primarily seeds and healthy grains like millet and quinoa.  Better Store-Bought Alternatives: Food For Life Ezekiel 4:9 Sprouted Grain Bread, Manna Gluten Free Ancient Grains Bread. Here’s a list of more clean ingredient breads. 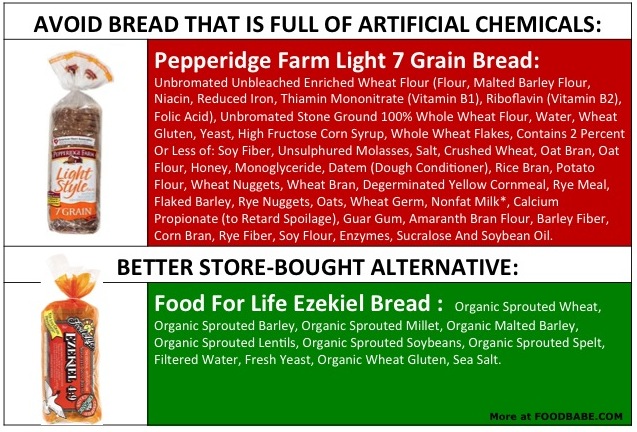 5.  Coffee Creamer That Is Full Of Trans Fat!

When I found out that Coffee-Mate Non-Dairy Creamer’s primary ingredient was partially hydrogenated oil I was disgusted. Millions of people are dumping deadly trans fat into their coffee every morning. Sure, they only use a bit in their coffee, but would anyone pour themselves a full glass of it? Of course not. Yet, they’ll eventually consume the entire container. This is the perfect example of why I think the motto “Everything in Moderation” is bogus. A FDA loophole allows Coffee-Mate to claim that it has no trans fat because it contains less than 0.5 g. per serving, although their “serving size” is only 1 tablespoon. According to the CDC, trans fats are linked to 7,000 deaths and over 20,000 heart attacks! Better Store-Bought Alternatives:  Coconut milk – it’s thick and creamy and most only contain 1 or 2 ingredients if you stick to the culinary version like Natural Value and Native Forest. You can also make your own coconut milk by combining 1/4 cup coconut manna and 4 cups water into a blender. Blend on high for 1-2 mins and keep milk in an air tight container in the fridge for up to 5 days. 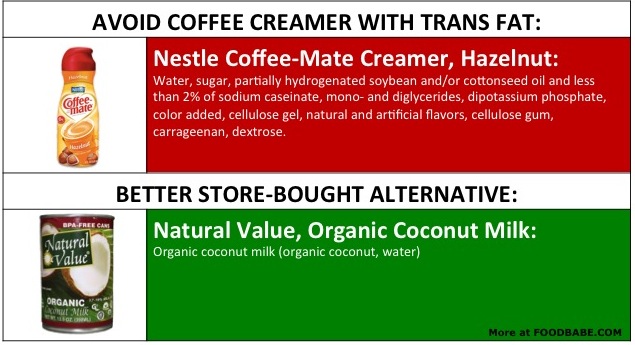 It’s outrageous that most conventional baby formulas in the store contain GMOs and milk from cows treated with antibiotics or artificial growth hormones. Even organic formulas aren’t perfect, and can contain carrageenan, synthetic preservatives, refined sugars with detectible levels of arsenic, and DHA extracted with hexane. As put in this guest post by Nutrition expert, Charlotte Vallaeys other options include donor milk and this recipe from the Weston A. Price Foundation. Better Store-Bought Alternative:  Baby’s Only Organic Formula and HiPP Organic Formula. 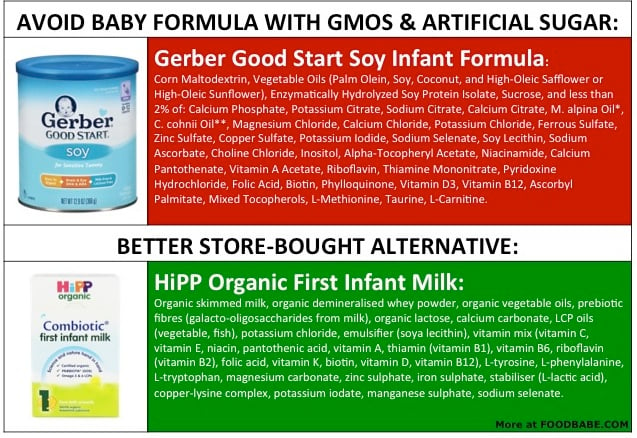 Tuna is not a main staple in my diet because the practices largely used in the industry aren’t sustainable and are endangering marine species. Couple that with the fact that mainstream tuna brands typically pack their tuna in a soy-based vegetable broth, and not actually in “water” like it says on the front of the can. If you like to occasionally eat tuna, seek out a brand from a sustainable fishery that uses pole & line (and troll-caught) fishing methods, preferably from North American waters and packed without additives in BPA-free cans. When tuna are pole & line caught they are younger and much smaller, so they do not have the high mercury content that is found in most regular tuna. Better Store-Bought Alternative:  American Tuna (brand) MSC Certified Sustainably Caught Albacore Tuna and Seafare Wild-Caught Tuna.

8.  Soda That Is Full Of Artificial Ingredients!

A common ingredient in regular soda is high fructose corn syrup, which has been shown to be processed by your body differently than regular cane sugar. According to a 2007 study, high fructose corn syrup contains “astonishingly high levels of reactive carbonyls”, which are not present in table sugar, and these carbonyls are believed to cause tissue damage, and may contribute to the development of diabetes. Even more disgusting is the use of chemical artificial sweeteners (like aspartame and sucralose) in diet drinks, as these have been shown to stimulate your appetite, increase carbohydrate cravings, and promote weight gain. Better Alternatives:  Homemade REAL Ginger-Ale, homemade iced tea or Kombucha. 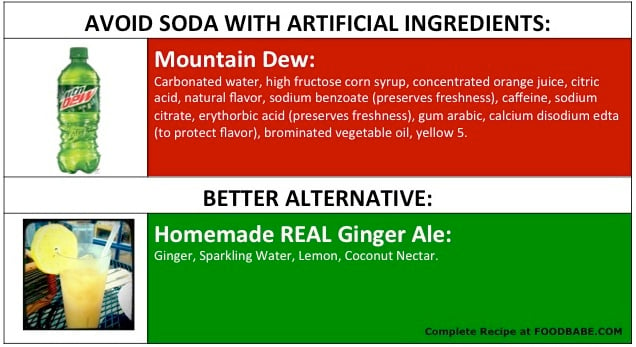 9.  Very Controversial Ingredients That Are In Cereal!

To think that this childhood morning staple is loaded with artificial colors, GMOs, preservatives, refined grains and sugar, makes me sick. One of the worst ingredients in many cereals is the preservative BHT (butylated hydroxytoluene).  It’s a known human allergen that has also caused tumor growth in animal studies. Due to serious health concerns, it’s been banned or restricted in several countries, yet it’s widely used in cereals here in the U.S. Better Alternatives: Oatmeal, Parfait Porridge, Two Moms In The Raw Plain Grain Free Cereal (gluten-free), Homemade Granola, Ezekiel 4:9 Sprouted Whole Grain Cereal & Qi’a from Nature’s Path. 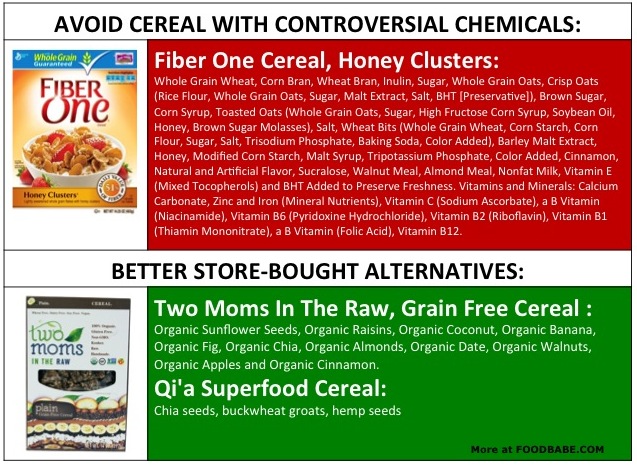 Most of the juice at the store is just glorified sugar water. They’re often made from concentrates, which means that the fresh juice has been heated down to syrup and reconstituted with water. During the concentration process, natural nutrients and flavors are lost, so they add those back in artificially. Even “100% Juice” often contains proprietary natural flavors that may be derived from anything natural, including animals. The juice is then heated up a second time to be pasteurized, which also denatures enzymes and destroys nutrients. So, after all that processing, it’s really not worth the money.  Better Alternatives:  Suja Essentials Line that is cold-pressed and organic or try making your own, this Ravishing Red Juice is a great one to start with! Also if you are looking for alternatives to Gatorade, please check out these ideas. 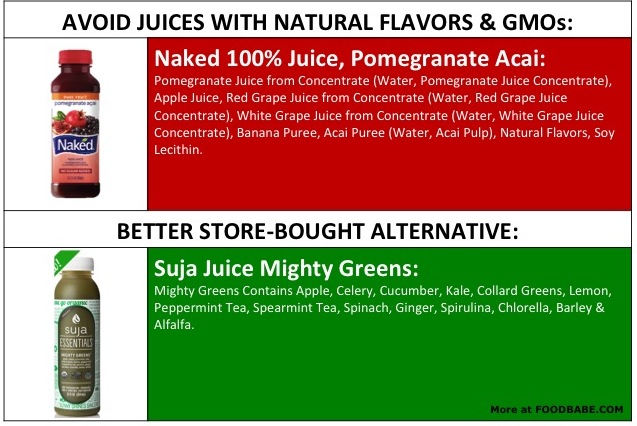 I hope this post inspires you to choose better alternatives at the grocery store or to start making your own homemade versions of this overly processed food! If you know someone who could benefit from these swaps, please share this post with them. Thank you for changing the world with me one person, one product and one company at a time. 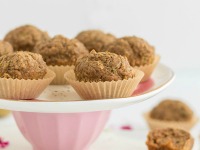 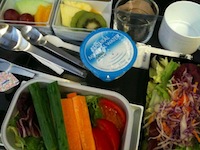 What’s The Best Airline for Health? 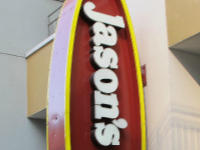 343 responses to “10 Grocery Store Items You Should Never Buy Again (Plus the good alternative swaps!)”